Urban wildlife is surprisingly understudied. We tend to know more about animals in exotic places than about those that live in our cities.

Consequently, they published the astonishing number of 689 species of invertebrates, which have managed to survive decades of farming and oil exploration, followed by development pressures, in the open access Biodiversity Data Journal. The study was minimally invasive as the live animals have been recorded with macro-photography.

Even though it is the insects that first developed the ability to fly, long before the dinosaurs became birds, the latter have always received the most of our attention. This major evolutionary breakthrough, which has occurred more than once in the past, is also a reason why insects are currently the most diverse animals on earth in terms of number of species.

"Insects and other invertebrates have filled all ecological niches and all corners of our planet," explain the authors. "No surprise that these small creatures conquered our cities and invaded our homes as well."

Most of the urban dwellers, however, have been introduced - accidentally or deliberately - by humans.

"The remainder - native 'wild' species - are able to survive in the city mainly due to their adaptivity," they point out. "It is therefore surprising to find a number of flightless species in a small area surrounded by urbanization."

The Madrona Marsh Preserve, boasting seasonal wetlands [image 1], is well known as a birdwatchers' paradise. Besides birds, its other vertebrates (mammals, reptiles, amphibians, and fishes), as well as its flowering plants, are relatively well known. The invertebrate fauna of the Preserve, on the other hand, aside from butterflies and dragonflies, was virtually unknown.

Interestingly, night surveys revealed the presence of a 'second shift' diversity, or creatures seemingly complementary to those active during the day.

Among the long-time survivors are wingless camel crickets as well as velvet ants, which are wasps whose flightless females look like furry ants. Another curiosity that intrigued the researchers is an obscure flightless female bradynobaenid wasp [image 2].

The researchers were especially surprised by their encounter with a large Solifugid [image 3] - also known as Camel Spider or Wind Scorpion. Solifugids are little-known arachnids that are neither spiders, nor scorpions, and can grow up to 15 cm (6 in). Their order's name Solifugae translates from Latin as "those that flee from the sun".

All in all, the biodiversity study resulted in 689 species without a backbone, belonging to 13 classes, 39 orders, and 222 families, found on this island surrounded by urbanization.

"Not unlike the moas and dodos, these 'island' inhabitants stayed grounded through the ages," acknowledge the researchers.

Emile Fiesler is president of Bioveyda Biodiversity Inventories, Surveys, and Studies, and Tracy Drake is manager of the Madrona Marsh Preserve. 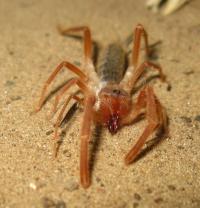