At 1521 UTC (11:21 a.m. EDT), a few hours before the storm formed, the Global Precipitation Measurement Mission or GPM core observatory satellite passed above that area and analyzed the rainfall occurring in the new storm. GPM is a joint mission between NASA and the Japanese space agency JAXA.

GPM's Microwave Imager (GMI) instrument provided a clear view of the rainfall associated with the forming tropical cyclone. GMI revealed that an intense rain band was wrapping into the center of the forming tropical cyclone from the northern side. GMI data indicated that precipitation in one of these intense rain bands was falling at a rate of over 53 mm (~2 inches) per hour.

Another instrument that flies aboard GPM called GPM's Dual-Frequency Precipitation Radar (DPR) 151.9 miles/245 km wide swath covered an area to the west of the forming tropical cyclone's center. DPR found that rain was falling at a rate of almost 2.8 inches or 72 mm per hour within scattered showers in that area. DPR also indicated that a few storm tops in the area west of the forming tropical cyclone reached altitudes above 7.7 miles or 11.52 km high.

At 02:04 UTC on May 4 or 1:04 p.m. Vanuatu local time (10:04 p.m. EDT on May 3) the Visible Infrared Imaging Radiometer Suite (VIIRS) instrument aboard NASA-NOAA's Suomi NPP satellite provided a visible-light image when it passed over Vanuatu. The image showed the center of circulation just northeast of the northernmost islands. Powerful bands of thunderstorms circled the center of circulation and a large band of thunderstorms extended south over many of the islands.

Tropical Cyclone Warning Number 11 issued by the Vanuatu Meteorology and Geo-Hazards Department (VMGD) at 12 a.m. local time on Friday, May 5 (11 a.m. EDT/US on May 4) includes Torba, Penama, Sanma and Malampa.

The Joint Typhoon Warning Center (JTWC) predicts that tropical cyclone Donna will intensify while moving southwestward toward Vanuatu. Donna's maximum sustained winds are expected to be about 95 knots (109 mph) as Donna gets close to the northern islands of Vanuatu on May 5, 2017. Tropical cyclone Donna is then expected to batter the islands with maximum sustained winds increasing to 110 knots (127 mph) as its track curves toward the south-southeast. 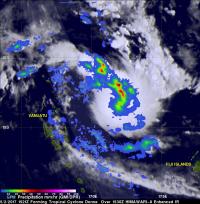