Plants need sunlight to feed and grow. Without light, the photosynthesis, the reaction by which the plant chloroplasts convert atmospheric CO2 and water into sugars and oxygen, cannot take place. In some situations, such as in forest areas or in high-density cultivated fields, plants compete with each other for sunlight. When a plant perceives the shade or the proximity of other plants, it activates a mechanism to elongate and grow more than the neighbouring plants. This mechanism is known as the shade avoidance syndrome (SAS). However, a strong elongation can be detrimental to the plant by consuming resources that may be necessary in other circumstances (for example, if the light conditions change suddenly). How do the plants elongate to compete with their neighbours without exposing themselves to unnecessary expenses and risks? Now, a team led by researchers at the Center for Research in Agrigenomics (CRAG) has discovered that chloroplasts regulate this intricate balance between winning and being cautious. The results are published this week in the prestigious journal The Plant Cell.

The collaboration between the CRAG teams led by the ICREA researcher Jaume Martínez-García and the CSIC researcher Manuel Rodríguez-Concepción has shown that shade conditions reduce the levels of photosynthetic pigments (chlorophylls and carotenoids). Thus, photosynthesis in the chloroplasts is altered in a progressive manner, generating retrograde signals that travel from the chloroplast to the nucleus to change gene expression and attenuate plant elongation. "We have discovered that chloroplasts can also function as sensors for shade conditions and activate a brake on the shade avoidance syndrome mechanism, so that the plant does not compromise too much and is ready in case the light conditions change suddenly", explains Rodríguez-Concepción. "Understanding how plants respond to the shade produced by other plants, will contribute to improve crop productivity, as it will provide strategies to obtain better yields without increasing the amount of land used", adds Martínez-García.

Chloroplasts: much more than photosynthesis

The discoveries reported in the article at The Plant Cell have been made in the small model plant Arabidopsis thaliana. The CRAG researchers pharmacologically reduced the concentration of photosynthetic pigments in the chloroplasts, and measured the variation in their length when the plantlets were exposed to conditions that simulate plant shade. They observed that those seedlings whose chloroplasts had a high carotenoid and chlorophyll concentration elongated significantly when they were in the shade of others, or, in other words, activated the SAS. However, plants with fewer photosynthetic pigments were much shorter, that is, they stopped their SAS.

In successive experiments, the researchers showed that the plant hormone abscisic acid, which is synthetized in chloroplasts upon carotenoid degradation, is a key component to attenuate the SAS.

During evolution, chloroplasts were formed from photosynthetic bacteria that were incorporated into other cells, which eventually gave rise to the plants. Although its fundamental role in plants is still the photosynthesis, the results of this work support the idea that chloroplasts also participate in the adjustment of the plant morphological development to light. In other words, chloroplasts make sure that the plant grows in the best way so that photosynthesis is optimal.

The Centre for Research in Agricultural Genomics (CRAG) is a centre that forms part of the CERCA system of research centers of the Government of Catalonia, and which was established as a partnership of four institutions: the Spanish National Research Council (CSIC), the Institute for Agri-Food Research and Technology (IRTA), the Autonomous University of Barcelona (UAB) and the University of Barcelona (UB). CRAG's research spans from basic research in plant and farm animal molecular biology, to applications of molecular approaches for breeding of species important for agriculture and food production in close collaboration with industry. CRAG has been recognized as "Centro de Excelencia Severo Ochoa 2016-2019" by the Spanish Ministry of Economy and Competitiveness.

Growing the tallest is not always the best option 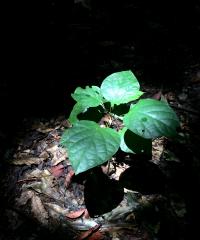 Under the Arboreal Canopy