PRINCETON, N.J.—Stories about wartime atrocities and torture methods, like waterboarding and beatings, often include justifications – despite whether the rationale is legitimate.

Now, a study by Princeton University's Woodrow Wilson School shows how those justifications actually creep into people's memories of war, excusing the actions of their side. The researchers report in Psychological Science shows how Americans' motivation to remember information that absolves American soldiers of atrocities alters their memories.

"People are motivated to remember information that morally disengages them," said lead author Alin Coman, an assistant professor of psychology and public affairs at the Wilson School. "By doing so, they can absolve themselves or their group from responsibility."

For the study, Coman and his collaborators – Charles Stone from John Jay College of Criminal Justice and Emanuele Castano and William Hirst from The New School for Social Research – recruited 72 participants: Fifty-six percent were female, 44 percent were male and all participants identified as European-American.

Experiments were conducted in two parts. First, in the study phase, participants were asked to read four, 160-word stories about situations that soldiers and fighters were exposed to in Iraq and Afghanistan. Each story contained both atrocities committed by the soldiers and the justifications for those actions. All stories were fictitious but based on true media reports of atrocities that had occurred in Iraq and Afghanistan. Each tale contained "critical items," which included details of the atrocities committed by soldiers and the justifications for these atrocities, and "filler facts," such as the soldiers' fictitious names and hometowns.

Two versions of each story were created – one in which the perpetrator was an American soldier (ex. "Jim Green") and another in which the perpetrator was an Afghan soldier (ex. "Jawid Gawri). Half of the participants read the American version of the story while the other half read the Afghan version. The order of the stories varied among participants, and they had 90 seconds to read each tale. One story included a soldier who hit a prisoner repeatedly with a belt because the prisoner threw food in the cafeteria. Another story depicted a soldier submerging a prisoner's head in water because he was unwilling to speak about an upcoming attack.

Next, in the practice phase, participants watched a video of either a male or female actor selectively retelling only the atrocities from two of the initially studied stories. However, this time, the actors left out the justifications. Coman and his collaborators designed the experiment this way to analyze retrieval-induced forgetting, a phenomenon in which the brain filters out some memories and holds on to others, altering the initially stored memory of an event.

"When we retrieve memories we usually don't remember everything we experience," said Coman. "Rather, we selectively retrieve information from memory. The simple act of retrieving memories reinforces those memories and makes them more likely to be remembered in the future. But, this comes at a cost – important information related to these memories can be lost later."

After the second phase was completed, participants then performed what Coman calls a "distractor task," which included filling out a basic questionnaire. This exercise mimicked the natural delay between hearing a story and retelling it later. Participants were then isolated in a room and asked to write down everything they could about the original four stories they read. To jog their memories, participants were given cue words like "Jim Green" and "robbery."

The recall data was then coded based on what participants remembered, and the researchers analyzed and computed the recall scores for the atrocities, justifications and filler facts. Through statistical analyses, they found that atrocities mentioned by the actors were more likely to be remembered by the participants, regardless of whether the perpetrator was American or Afghan. However, they also found that participants were more likely to remember the justifications for atrocities committed by Americans soldiers than for atrocities committed by the Afghan soldiers.

"As an American participant, you would like to justify those atrocities and so you say, 'Yes, those happened but they happened for a reason.' So, as you're listening to the information presented by the speaker in the video, these motivational forces are driving you to retrieve justifications for the atrocities committed by American soldiers," Coman said.

The findings have implications for both policy and journalism, Coman said.

"In terms of policy, it's important to acknowledge that the way you remember the past is guiding your decisions, the way you vote and who you support. While this study didn't analyze political behavior, the general finding could have overtones in the political domain, from political campaigning to ethnic conflict."

"In terms of journalistic reporting, journalists need to decide how to report information from wartime situations," Coman said. "Do they include both atrocities and justifications? How can they better report these situations so they aren't creating conditions for these biases to emerge?"

Coman and his students are currently working on a project investigating the effects of socially shared retrieval-induced forgetting, a phenomenon by which individuals synchronize their memories as a result of the conversations they have with one another. In the current study, Princeton students are listening to other Princeton students – as well as students from Yale – remember stories about their own groups.

The paper, "Justifying Atrocities: The Effect of Moral-Disengagement Strategies on Socially Shared Retrieval-Induced Forgetting," was first published online April 18 in Psychological Science. The research was supported by the grant BCS-0819067 from the National Science Foundation. 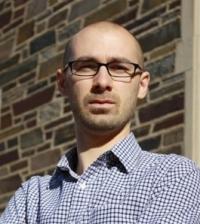