The latest version of a microfluidic device for capturing rare circulating tumor cells (CTCs) is the first designed specifically to capture clusters of two or more cells, rather than single cells. The new device called the Cluster-Chip was developed by the same Massachusetts General Hospital (MGH) research team that created previous microchip-based devices and is described in a Nature Methods paper receiving advance online publication. Recent studies by MGH investigators and others have suggested that CTC clusters are significantly more likely to cause metastases than single circulating tumor cells.

"Early theories of cancer metastasis were based on clumps of tumor cells traveling through the bloodstream, but given that CTC clusters are even rarer in the blood than single CTCs, they have attracted minimal attention for several decades," explains Mehmet Toner, PhD, director of the BioMicroElectroMechanical Systems Resource Center in the MGH Department of Surgery, the paper's senior author. "The ability to isolate intact clusters will enable is to investigate carefully their role in the metastatic process, and understanding metastasis really is the 'Holy Grail' of cancer research."

CTCs are living solid tumor cells found in the bloodstream at extremely low levels - about one in a billion cells. Starting in 2007, MGH researchers have developed three microchip-based devices that capture CTCs in ways that preserve molecular information that can help guide clinical treatment. The first two versions used antibodies directed at specific proteins on the surface of tumor cells, which limited the ability to capture cells that may have lost those marker proteins during the process of metastasis. The third version, developed in 2013, uses antigen-independent methods of isolating CTCs, which is also the case for the Cluster-Chip.

"Cancer is an extremely heterogeneous disease, and even within the same tumor you can find cells with different surface antigens," says Fatih Sarioglu, PhD, co-lead author of the Nature Methods paper. "Since we are capturing clusters because of their physical properties, this chip is directly applicable to all types of cancer." Formerly a postdoctoral fellow at the BioMEMS Resource Center, Sarioglu is now on the faculty at the Georgia Institute of Technology.

Sarioglu explains how the physical properties of clusters drove the strategy behind the device's design. The 3- by 1 ½-inch plastic chip through which a blood sample is passed consists of thousands of triangular microposts arranged in such a way that clusters passing between two posts will become trapped on the apex of a third central post and held in place by the balanced flow of fluid on either side. Single CTCs and blood cells will pass right through without being captured. In addition, the slow rate at which a sample is passed through the device minimizes the possibility that clusters will be broken, distorted or escape.

Initial testing of the Cluster-Chip with blood samples to which artificial tumor cell clusters had been introduced helped to determine the optimal flow rate for capturing the most clusters in the least time. The researchers then compared the new device to the second-generation HBCTC-Chip, which relies on known cell-surface markers and was the first to isolate CTC clusters. The Cluster-Chip proved to be 40 to 50 percent better at finding clusters of cells expressing targeted markers and 1000 percent better at capturing cells without target antigens. While initial attempts to release captured clusters from the device by simply reversing the fluid flow had limited success, the investigators found that reducing the temperature of the device itself to 4 C (39 F) not only released 80 percent of clusters but also improved the purity of the captured material by reducing the undesired capture of white blood cells.

Use of the Cluster-Clip to test blood samples from 60 patients with either breast cancer, melanoma or prostate cancer successfully captured CTC clusters in from 30 to 40 percent of samples from each group. Analysis of captured clusters revealed that they consisted of cells with significant molecular differences, some actively proliferating and other relatively quiescent, and were often accompanied by immune cells, an observation that could have important implications with the increased attention to immune-system-based cancer therapies.

"Testing of patient blood samples also revealed that there were significantly more CTC clusters in the blood than was previously believed," says Toner. "We now are looking at ways to improve further the release of captured clusters, but we are only at the beginning of our quest to understand the role and biology of CTC clusters. Eventually we could develop ways to target clusters therapeutically as well as use them as a source of diagnostic information." Toner is the Benedict Professor of Surgery at Harvard Medical School, and Sarioglu is an assistant professor in the School of Electrical and Computer Engineering at Georgia Tech.

"This new isolation device will be particularly useful in isolating these clusters that seem to be the most malignant and metastasis-prone types of cancer cells in the blood," says Daniel Haber, MD, director of the MGH Cancer Center and a co-author of the Nature Methods paper. "I'm particularly excited by the way in which the device was created -- starting from a clinical and biological observation about the importance of CTC clusters and then designing a specific microfluidic device to capture these cells, which will make it possible to study them in greater detail."

Nicola Aceto, PhD, of the MGH Cancer Center is co-lead author of the Nature Methods paper. Support for the current study includes grants from the National Institutes of Health, the National Institute of Biomedical Imaging and Bioengineering, a "dream team" grant from Stand Up to Cancer, the Howard Hughes Medical Institute, the Prostate Cancer Foundation, the Charles Evans Foundation, and Johnson and Johnson. The MGH has filed a patent application for the Cluster-Chip. 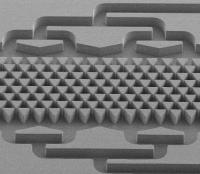