New research provides the first direct evidence for the Gulf Stream blender effect, identifying a new mechanism of mixing water across the swift-moving current. The results have important implications for weather, climate and fisheries because ocean mixing plays a critical role in these processes. The Gulf Stream is one of the largest drivers of climate and biological productivity from Florida to Newfoundland and along the western coast of Europe.

The multi-institutional study led by a University of Maryland researcher revealed that churning along the edges of the Gulf Stream across areas as small as a kilometer could be a leading source of ocean mixing between the waters on either side of the current. The study was published in the Proceedings of the National Academy of Sciences on July 6, 2020.

"This long-standing debate about whether the Gulf Stream acts as a blender or a barrier to ocean mixing has mainly considered big ocean eddies, tens of kilometers to a hundred kilometers across," said Jacob Wenegrat, an assistant professor in UMD's Department of Atmospheric and Oceanic Science and the lead author of the study. "What we're adding to this debate is this new evidence that variability at the kilometer scale seems to be doing a lot of mixing. And those scales are really hard to monitor and model."

As the Gulf Stream courses its way up the east coast of the U.S. and Canada, it brings warm salty water from the tropics into the north Atlantic. But the current also creates an invisible wall of water that divides two distinct ocean regions: the colder, fresher waters along the northern edge of the Gulf Stream that swirl in a counterclockwise direction, and the warmer, saltier waters on the southern edge of the current that circulate in a clockwise direction.

How much ocean mixing occurs across the Gulf Stream has been a matter of scientific debate. As a result, ocean models that predict climate, weather and biological productivity have not fully accounted for the contribution of mixing between the two very different types of water on either side of the current.

To conduct the study, the researchers had to take their instruments to the source: the edge of the Gulf Stream. Two teams of scientists aboard two global-class research vessels braved winter storms on the Atlantic Ocean to release a fluorescent dye along the northern front of the Gulf Stream and trace its path over the following days.

The first team released the dye along with a float containing an acoustic beacon. Downstream, the second team tracked the float and monitored the concentration of dye along with water temperature, salinity, chemistry and other features.

Back on shore, Wenegrat and his coauthors developed high-resolution simulations of the physical processes that could cause the dye to disperse through the water in the manner the field teams recorded. Their results showed that turbulence across areas as small as a kilometer exerted an important influence on the dye's path and resulted in significant mixing of water properties such as salinity and temperature.

"These results emphasize the role of variability at very small scales that are currently hard to observe using standard methods, such as satellite observations," Wenegrat said. "Variability at this scale is not currently resolved in global climate models and won't be for decades to come, so it leads us to wonder, what have we been missing?"

By showing that small-scale mixing across the Gulf Stream may have a significant impact, the new study reveals an important, under-recognized contributor to ocean circulation, biology and potentially climate.

For example, the Gulf Stream plays an important role in what's known as the ocean biological pump--a system that traps excess carbon dioxide, buffering the planet from global warming. In the surface waters of the Gulf Stream region, ocean mixing influences the growth of phytoplankton--the base of the ocean food web. These phytoplankton absorb carbon dioxide near the surface and later sink to the bottom, taking carbon with them and trapping it in the deep ocean. Current models of the ocean biological pump don't account for the large effect small-scale mixing across the Gulf Stream could have on phytoplankton growth.

"To make progress on this we need to find ways to quantify these processes on a finer scale using theory, state-of-the-art numerical models and new observational techniques," Wenegrat said. "We need to be able to understand their impact on large-scale circulation and biogeochemistry of the ocean."

The field research was conducted from the University-National Oceanographic Laboratory System vessels R/V Knorr and R/V Atlantis and was supported by the Scalable Lateral Mixing and Coherent Turbulence Departmental Research Initiative of the Office of Naval Research. The content of this article does not necessarily reflect the views of these organizations.

First direct evidence of ocean mixing across the gulf stream 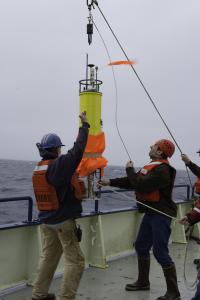