After several years of theorizing and experimenting, an international team of researchers including scientists at Okinawa Institute of Science and Technology Graduate University (OIST) has finally succeeded in measuring how heat passes between two gold electrodes through a single molecule. They report their findings in Nature on July 17, 2019.

Around 2000, scientists first measured how electrons flow through single molecules. Other properties, such as how molecules emit light, have also been studied. But quantifying the heat transfer, or thermal conductance, at the molecular scale remained a persistent challenge because of the high measurement resolution required.

To achieve this elusive goal, the international team of collaborators had to work on both an experimental and a theoretical level.

Scientists at University of Michigan developed a setup called a scanning thermal microscope, which positions a single alkane molecule between a gold-coated probe and a gold layer. The gold probe is heated and then held above a cold gold substrate in such a way that the alkane molecule forms a link between the probe tip and substrate layer. Due to the difference in temperature, heat passes from the hot gold to the cold gold through the molecule. The alkane molecules employed were synthesized by scientists at Kookmin University, South Korea.

Thermal conduction is a process most of us are familiar with, and heat can be transported in various ways. Here, the heat was carried by the vibrations of atoms in the alkane molecule, which the scanning thermal microscope could detect.

OIST's Leader of the Quantum Transport and Electronic Structure Theory Unit, Prof. Fabian Pauly, and his PhD student Jan Klöckner, were the theorists on the paper.

While each measurement takes only seconds, the microscope gathers averages over many trials to determine the thermal conductance of a single molecule.

The scientist used alkane molecules of different lengths. Previously, Pauly's group made predictions on the size of thermal conductance values for such single molecule-junctions. The predictions provided important information for the experimentalist in the study regarding the measurement resolution needed.

"Having shown that heat transport at the molecular scale is rather length-independent, we must now try to find out how we can enhance or reduce it," Pauly said. "Ultimately, what we hope to do in the future is to identify ways of controlling the flow of heat by molecular design."

The ability to regulate how much heat passes through a material requires a detailed understanding of heat flow at the molecular scale, Pauly explained. "For example, to characterize the efficiency of thermoelectric devices, which can be used to convert heat into electrical energy, the thermal conductance has to be known."

The research spans several different fields of science. The lead authors on the paper, Prof. Pramod Reddy and Prof. Edgar Meyhofer of University of Michigan, are mechanical engineers. The other corresponding authors, Prof. Sung-Yeon Jang of Kookmin University and OIST's Prof. Fabian Pauly, are a chemist and a theoretical physicist, respectively.

The experimental and theoretical tools that the international team has developed pave the way for scientists to study how heat moves at the molecular scale, and hopefully to find new ways of controlling this flow by the design of new molecular structures. 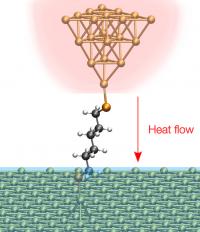 Heat Flow through a Single-Molecule Junction