The study, conducted by an international coalition led by scientists from Australia and Norway, showed that coral reef fish exposed to CO2 at levels expected by the end of the century did not change their activity levels or ability to avoid predators.

"Contrary to previous studies, we have demonstrated that end-of-century CO2 levels have a negligible impact on the behaviour and sensory systems of coral reef fish," said Timothy Clark, the lead author of the study and an associate professor at Deakin University in Australia.

One of the many jobs the ocean does for humankind is to soak up a percentage of carbon dioxide released from burning fossil fuels.

A study led by the US National Oceanic and Atmospheric Administration (NOAA) from March 2019 showed that the world's oceans absorbed 34 billion metric tons of carbon from the burning of fossil fuels from 1994 to 2007--amounting to about 31 per cent of all carbon dioxide released to the atmosphere.

Researchers believe that by the end of the century, the oceans could absorb so much more CO2 that carbon dioxide levels will be higher than what most marine species have experienced in the past 30 million years.

Nevertheless, because fish have regulatory systems that allow them to cope with changing water acidity, most fish physiologists assumed that they will able to handle the increased acidity -- until half-a-dozen highly publicized reports showed that fish, especially coral reef fish, were dramatically affected by increased CO2 -- to the point where they would swim towards predators, rather than away from them.

Despite our new results, coral reefs and their fish communities remain in grave danger because of increasing atmospheric CO2.

"The reports described effects across a range of life stages, including altered smell, hearing, vision, activity levels, boldness, anxiety and susceptibility to predation," said Fredrik Jutfelt, an associate professor at the Norwegian University of Science and Technology and one of the authors on the paper.

However, the reports describing these negative effects also had substantial inconsistencies, even though the studies relied on similar methods to test for results.

So Clark and Jutfelt and their colleagues decided to see if they could replicate the results by conducting their own carefully documented research.

But their results were exactly the opposite. They found normal behaviour in the species of fish they looked at.

"Unexpected scientific results always spark interest from other scientists, but before too much trust is placed in the findings, the effects need to be repeated by other research teams. This independent replication is an important part of science," says Jutfelt.

He said the research team wanted to respond to the need, internationally, for issues of global importance to be studied in a way that other researchers can replicate results.

That's why they designed their multi-year study to match the species, life stages and location and seasons of the earlier studies that showed such catastrophic effects, Jutfelt said.

The researchers were also very careful to document their experiments with videos, and also have made their raw data and analysis available so that other researchers could see exactly what they had done, said Josefin Sundin, the last author on the paper and a researcher at the Swedish University of Agricultural Sciences.

"As far as possible, we used automated tracking software to analyse the videos from our experiments, to minimize observer bias, and we also made our raw data and analysis code available to other researchers", she said.

Their findings were consistent and clear -- that coral reef fish behavior wasn't changed by ocean acidification.

Although this finding may offer a small glimmer of hope for coral reef fishes, climate change continues to present an enormous and serious problem, the researchers aid.

"While our new work suggests ocean acidification may not cause population declines because of behavioural disturbances in coral reef fishes, climate change is currently destroying the reef habitat through coral bleaching during heat waves," Clark said. "So, despite our new results, coral reefs and their fish communities remain in grave danger because of increasing atmospheric CO2". 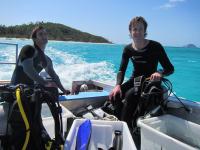