Tropical Cyclone 15S continued to meander in the Mozambique Channel of the Indian Ocean when NASA's Aqua satellite passed overhead and captured a picture of it. The storm's lack of direction is short-lived, however, as forecasters at the Joint Typhoon Warning Center or JTWC expect that the storm will move in a southwesterly direction and landfall in west central Madagascar by March 9.

The Moderate Resolution Imaging Spectroradiometer or MODIS instrument that flies aboard NASA's Aqua satellite captured a visible image of Tropical Cyclone 15S on March 5 at 11:25 UTC (6:25 a.m. EST) when it was hugging the coast of eastern Mozambique. The MODIS image showed that the bulk of clouds and rain were north and west of the center of circulation, extending over the Mozambique coastline, while the center of Tropical Cyclone 15S remained over the open waters of the Mozambique Channel.

On March 6 at 1500 UTC (10 a.m. EST), Tropical Cyclone 15S was centered near 16.5 south latitude and 41.3 east longitude, about 349 nautical miles (401 miles/464 km) north-northeast of Europa Island. Maximum sustained winds were still near 35 knots (40 mph/62 kph), but are expected to increase over the next two days as it moves away from Mozambique and into the open waters of the Mozambique Channel, toward Madagascar. At 1500 UTC, however, it was moving slowly at 2 knots (2.3 mph/3.7 kph) to the west-northwest.

Tropical Cyclone 15S is expected to make landfall in west central Madagascar's Tsingy de Bemaraha Strict Nature Reserve and move across the island nation in a southeasterly direction, with its center expected to pass just south of the capital city of Antananarivo before exiting the east coast early next week. 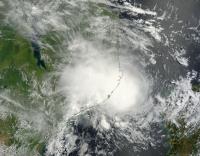