A research project on algal blooms along the Swedish coast, caused by eutrophication, revealed that large predators such as perch and pike are also necessary to restrict these blooms. Ecologist Britas Klemens Eriksson from the University of Groningen and his colleagues from Stockholm University and the Swedish University of Agricultural Sciences, Sweden have now shown that stickleback domination moves like a wave through the island archipelagos, changing the ecosystem from predator-dominated to algae-dominated. Their study was published on 27 August in the journal Communications Biology.

Eriksson experimented with the effects of nutrients on algal blooms while working as a postdoctoral researcher in Sweden. When he added nutrients to exclusion cages in the brackish coastal waters, algae began to dominate. This was no surprise. However, when he excluded large predators, he saw similar algal domination. 'Adding nutrients and excluding large predators had a huge effect,' he recalls, 10 years later.

The big question that arose from these results using small exclusion cages was whether the results would be the same for the real Swedish coastal ecosystem. This coast consists of countless archipelagos that stretch up to 20 kilometres into the sea, creating a brackish environment. Here, perch and pike are the top predators, feeding on sticklebacks, which themselves eat the small crustaceans that live off algae.

To investigate how this food web developed over the past 40 years, Eriksson (who had moved to the University of Groningen in the Netherlands) connected with his colleagues at Stockholm University and the Swedish University of Agricultural Sciences to gather data on fish abundances and to carry out a series of field studies. They were inspired by recent suggestions that regime shifts can occur in closed systems such as lakes and wondered whether algal blooms in the Baltic sea could also be a consequence of such a regime change.

Eriksson and his colleagues sampled 32 locations along a 400-kilometre stretch of coastline. 'We visited these sites in the spring and autumn of 2014 and sampled all levels of the food web, from algae to top predators.' These data were subsequently entered into a food web model, which helped them to find connections between species. The models showed that the small sticklebacks were important for the reproduction of the larger predators. And a local increase in sticklebacks means that a lot of the grazers in the ecosystem are eaten, which drives algal domination.

'If you just look at the abundances of fish, you find a mixed system in which different species dominate,' Eriksson explains. But looking at the changes in these fishery data over time showed an increase in sticklebacks that started in the late 1990s, initially in the outer parts of the archipelagos. 'This is presumably caused by a reduction in the number of large predators. The reduction is the combined result of habitat destruction, fishing and increased predation by cormorants and seals.' Sticklebacks migrate from the outer archipelagos inwards to reproduce, linking coastal and offshore processes.

Reduced predation increases the survival of sticklebacks, while both eutrophication and warming help to increase their numbers even further. As the sticklebacks reduced the number of grazers, algae began to replace seagrass and other vegetation. Furthermore, the sticklebacks also fed on the larvae of perch and pike, thereby further reducing their numbers. 'This is a case of predator-prey reversal,' explains Eriksson. Instead of top predators eating sticklebacks, the smaller fish strongly reduced the number of perch and pike larvae.

Over time, the stickleback domination moved inwards like a wave: regional change propagated throughout the entire ecosystem. This has important consequences for ecosystem restoration. 'To counter algal blooms, you should not only reduce the eutrophication of the water but also increase the numbers of top predators.' It means that those organizations that manage fisheries must start working together with those that manage water quality. 'We should not look at isolated species but at the entire food web,' says Eriksson. 'This is something that the recent EU fishery strategy is slowly starting to implement.'

Furthermore, the propagation of local changes throughout a system has wider implications in ecology, especially in natural ecosystems that have complex interaction and information pathways. 'And we know this from politics and human behaviour studies. A good example is the Arab Spring, which started locally and then propagated across the Middle East.'

A video summarizing the results from this study can be viewed here: https://youtu.be/wkkOS0rTxDI

Ecologists know that too many nutrients in the sea will increase the growth of algae, which changes the underwater ecosystem. Ten years ago, through small-scale experiments, ecologist Britas Klemens Eriksson discovered that removing the top predators could also increase algal growth. He has now studied data on fish abundances along the Swedish coast going back 40 years and has analysed the entire food web, from algae and plant eaters to medium-sized predators, such as sticklebacks, and top predators such as perch and pike. The results show that overfishing of top predators increases the number of sticklebacks, which then eat the plant eaters and even the larvae of the top predators. Thus, the ecosystems flip from being dominated by top predators to being dominated by algae. The results are important for the protection of coastal ecosystems. These ecosystems need top predators to keep the algae in check. 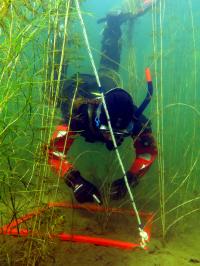 A Survey of Underwater Vegetation