A study led by researchers at the University of California, San Diego shows that California's 40 year-long tobacco control program has resulted in lung cancer rates that are nearly 25 percent lower than other states.

"The consistency in the trends from cigarette sales and population surveys was reassuring" said John P. Pierce, PhD, Sam M. Walton Professor of Cancer Research in the Department of Family and Preventive Medicine at UCSD School of Medicine and director of the Population Sciences Division at Moores UCSD Cancer Center. "What is really important is that the widening gap in smoking behavior between California and the rest of the nation is replicated in the lung cancer data 16 years later. There is no other behavior that affects a disease like this."

California established the nation's first comprehensive Tobacco Control Program in 1989. Subsequently, the rate at which Californians reduced smoking doubled. Californians now smoke half as many cigarettes as people in the rest of the country (9.3 percent/17.8 percent), and fewer than 10 percent of its population smokes, according to a study published in the journal Cancer Epidemiology, Biomarkers and Prevention. The study credits the state's aggressive tax on cigarettes and its decades-long, comprehensive tobacco control program.

However, the research also suggests that because – for the first time in more than 20 years – California has not kept up with the rest of the nation in increasing the price of cigarettes and is being outspent on tobacco control, its lead in lowering cigarette consumption and lung cancer may shrink in the future.

"We expect that the success of the tobacco control program over the last 16 years will translate into a further widening in lung cancer mortality for the short term future," explained Pierce. "But in the longer term, unless California increases its current tobacco control efforts, it will lose this advantage."

The team analyzed major national surveys conducted since 1965 as well as data from taxed cigarette sales to calculate trends in smoking behavior each year since 1960, and then compared these trends with lung cancer mortality data reported by the Centers for Disease Control.

"Because we had data back to 1960, we were able to show that smoking behavior in California was not different than the rest of the nation before the advent of public health action against smoking," said co-author Karen Messer PhD, professor of family and preventive medicine and director of biostatistics at Moores UCSD Cancer Center. "It was California's statewide leadership in tobacco control that was associated with the lower smoking rates in California as compared to the rest of the nation."

"This definitive study demonstrates that lung cancer can be reduced markedly by increasing excise taxes and running a state-of-the-art tobacco control program," said George Lemp, DrPH, acting director of the Tobacco Related Disease Research Program at the University of California who funded the study.

This study was funded through grants from the University of California Tobacco Related Disease Research Program. 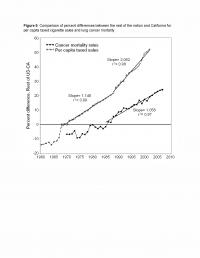