Former NFL players were integral in designing the app to focus on health issues that matter most to them, such as memory, balance, heart health, pain and mobility. For the first time, anyone with an iPhone can support the study of athlete health and help researchers better understand the health issues that matter most to former NFL players. TeamStudy is available as a free download from the App Store.

By engaging the general public, TeamStudy is establishing a control group that includes both men and women, as well as athletes and nonathletes. All study participants can interact directly with the Harvard research team, contributing questions and, over time, receiving results and statistics on the study findings. TeamStudy makes it easy for participants to enroll through an interactive informed consent process, and enables users to easily complete tasks and surveys directly from their iPhone.

"By bringing the Football Players Health study to this app, we're able to easily capture data from participants all over the nation, enabling us to better understand the everyday experiences of former NFL players," said Alvaro Pascual-Leone, the principal investigator of TeamStudy. Pascual-Leone is a professor of neurology at Harvard Medical School, chief for the Division of Cognitive Neurology at Beth Israel Deaconess Medical Center, and director of the Berenson-Allen Center for Noninvasive Brain Stimulation.

"Traditionally, we study participants in one location, failing to capture their real-life, day-to-day experience--for example, understanding things like pain and daily activity," Pascual-Leone said. "Using ResearchKit, we will be able to quickly identify patterns that could lead to treatments for health conditions faced by former NFL players."

"Assessing cardiovascular health is a key function of the app and a priority of the Football Players Health Study. We need to understand more about heart health among former athletes and work to identify factors that contribute both to health and disease," said Aaron Baggish, associate director of Massachusetts General Hospital's Cardiovascular Performance Program and co-medical director of the Boston Marathon.

Former players have been involved not only in the design of the app, but also in testing. "As a former linebacker with the Dallas Cowboys for seven years, I can tell you that knowledge is key to progress. When we leave the game, there is not enough information available for us to understand our state of health," explained Dat Nguyen. "For years, we've asked ourselves these questions: 'Should my joints have this much pain? Is my memory normal? Should I be concerned about my heart health?' TeamStudy will allow the Harvard researchers to answer these questions and share the facts with all of us."

"This app will allow the Harvard team to take its work to another level--reaching perhaps thousands more former players and extending even further to fans, friends, spouses and other communities," said Mark Herzlich, a linebacker for the New York Giants and a member of the NFLPA Executive Committee. "Across the board, we're seeing more mainstream interest in supporting player health. TeamStudy will allow everyone's voice to be heard as app users perform simple activities and answer basic health questions."

About the Football Players Health Study at Harvard University

Launched in 2014, the Football Players Health Study at Harvard University is a series of studies and research initiatives addressing the whole player over the course of his entire life. The study is funded by the NFL Players Association, utilizing shared resources across supporting institutions at Harvard. With more than 2,800 participants enrolled, it is the largest study of former living players. Several smaller studies supporting novel research and promising treatments are currently underway across Harvard. 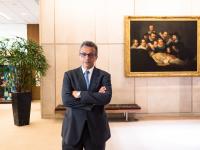 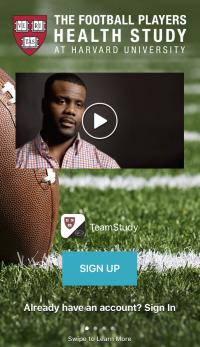