When ground-nesting wasps leave their nests each day, they turn back toward home before flying along a series of ever-increasing arcs. While the insects gain height and distance, their attention remains focused on the nest. By reconstructing what wasps see during these learning flights, researchers reporting in the Cell Press journal Current Biology on February 11 say that they have new insight into how the insects find their way home.

"Our findings tell us how wonderfully autonomous, flexible, and robust wasps are with their ability to know places in the world and shuttle back and forth between them," says Jochen Zeil of The Australian National University in Canberra. "They share this fundamentally important skill with most animals on earth."

Earlier studies had shown that the arcs wasps travel in learning flights follow a remarkably precise pattern. They also knew that wasps make very similar manoeuvres in return flights as they do during learning.

To find out more, Zeil and his colleagues set out to capture what exactly wasps see. But doing that turned out to be more challenging than it first seemed.

"I was especially surprised by how long it took us to find the right way of looking at what the wasps were doing," he says. "It took us over 10 years!"

First, the researchers recorded the wasps' head orientation--the direction of their gaze--with high-speed stereo cameras. They also moved a panoramic imager along the paths flown by the wasps and built 3D models of the wasps' environment to render views inside these models. In other words, they reconstructed a wasp's-eye view of the world, and of home in particular.

Next, they used those views to test specific predictions about what wasps learn during their learning flights and how they use this information to guide their return. They tested their predictions by simulating homing flights of wasps in virtual reality.

Their evidence suggests that wasps monitor changing views during learning flights and use the differences they experience relative to previously encountered views to decide when to begin a new arc. When they encounter a familiar view on the way home, wasps move to the left or right, depending on the direction of the nest relative to what they've seen. They also appear to rely on ground features near the nest to guide them.

Zeil says that his and his colleagues' efforts to examine the homing ability of wasps are part of a much larger effort by many others to develop the tools for ecological neuroscience, a field dedicated to exploring information processing under natural conditions. The next step for them is to explore how their findings in wasps can explain homing in other insects, particularly in bees and ants. They'd also like to understand how this navigational competence develops during the lifetime of an insect.

Zeil notes that the wasps' homing abilities make them "smarter" than anything humans now know how to build. On that note, he says, it will be interesting to apply and explore what they've learned in flying robots.

"It will be interesting to implement the learning and homing rules we found into flying robots to test the validity and limits of our findings," he says. "We want to understand what trick the insects are using to acquire the competence of homing."

The work was supported by the German Science Foundation, The Australian National University, the Australian Research Council, the Defence Science Technology Organization, Eglin Airforce Base, and he Go8 Australia-Germany Joint Research Collaboration Scheme.

This is what a wasp sees to learn the way home 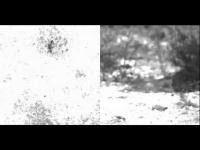 The Wasp 'Dance of Learning'