(PHILADELPHIA) -- The immune system orchestrates large and small scale attacks on innumerous targets: viruses, bacteria, cancer, but it also misfires causing allergy or autoimmune reactions. Compounding the problem, not every immune reaction is equal - sometimes a necessary reaction is not strong enough or at times it's too strong. Now Thomas Jefferson University researchers have developed a new way to determine the strength of an immune response to a particular antigen. The results, published in Nature Communications on October 27th, could be used to help doctors personalize immune-modulating therapies - like cancer immunotherapies, or immunosuppressive therapies used in organ transplantation - more effectively.

"The test, which we've named the CaFlux, is rapid, sensitive, and can test a broad array of antigenic targets," says senior author Yuri Sykulev, M.D., Ph.D., a Professor of Microbiology and Immunology and of Medical Oncology at the Sidney Kimmel Cancer Center at Jefferson "A future application of this test could help determine who might respond with a sneeze versus who might respond with anaphylactic shock before it happened."

While other tests for the strength of the immune response exist, some take one to two days and others are not as sensitive as the CaFlux. The speed (a few minutes) of Dr. Sykulev's method relies on the ability to detect one of the first changes an immune cell undergoes after recognizing a target: the opening of calcium channels.

The test works by attaching immune cells that can both respond to as well as display potential immune targets, and then flowing potential antigens over top to look for "matches." If the addition of antigen leads to a match between displayer and responder, the two cells grab hold of each other with their receptors. That grasp triggers calcium channels to open, which then activates a green fluorescence in the cells. The green light can be easily detected by microscope and quantified by image-reading software.

The stronger the match, the more calcium floods into the cell, and the brighter the green color. The weaker the match, the less calcium enters the cells over a longer period of time, producing a dimmer glow without a strong spike.

The test can help researchers see both how many T-cells respond in a given sample, as well as how powerfully and how rapidly each individual cell responds over time. These three pieces of information could more accurately predict how a person would react to a wide array of immune threats, from viral or bacterial attacks to allergens. The test could be useful in developing better vaccines, assessing the potency of immunotherapy interventions, and understanding the severity of disease -- and therefore the appropriate level of medical intervention.

To try out the principal on a real application, Dr. Sykulev and colleagues tested T-cells from a bone marrow transplant recipient for reactivity to cytomegalovirus (CMV). Most people harbor CMV, but the infection is usually kept in check by a healthy immune system. The virus can be deadly when it becomes reactivated in some bone marrow recipients whose immune system has been wiped out before the transplant. Today, doctors have limited ways of predicting whose CMV will become reactivated. When the researchers tested the new T cells after the transplant, the cells showed a slow and weak response to the same antigens, or CMV targets.

"That weak response was mirrored by what happened in the clinic," says oncologist Neal Flomenberg, Professor and Chair of the Department of Medical Oncology and Deputy Director of the Sidney Kimmel Cancer Center at Jefferson, who was also involved in the study. "The patient's CMV reactivated while the immune system was still rebooting and unable to mount a strong response against CMV, and he had to be treated for the infection. Had we been able to monitor this patient's immune system's ability to respond to CMV, we may have been able to tailor his treatment to better keep the CMV in check."

The researchers hope to develop this assay for use in applications ranging from cancer to basic immunology.

The assay is protected by pending patent (US62/183,997) and was supported by Pharma Germinator program of Southwestern PA and 5P30CA056036-17 core grant to the Sidney Kimmel Cancer Center. The authors declare no additional conflicts of interest.

Jefferson, through its academic and clinical entities of Thomas Jefferson University and Jefferson Health, is reimagining health care for the greater Philadelphia region and southern New Jersey. Since its mergers with Abington Health and Aria Health, Jefferson now has 23,000 people dedicated to providing the highest-quality, compassionate clinical care for patients, educating the health professionals of tomorrow, and discovering new treatments and therapies to define the future of care. With a university and hospital that date to 1824, today Jefferson is comprised of six colleges, nine hospitals, 32 outpatient and urgent care locations, and a multitude of physician practices throughout the region, serving more than 96,000 inpatients, 363,000 emergency patients and 1.9 million outpatient visits annually.

For more information and a complete listing of Jefferson services and locations, visit http://www.jefferson.edu. 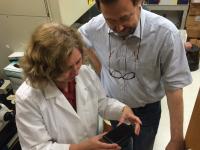