New species can be named for all types of attributes, but Natural History Museum of Los Angeles County entomologist Brian Brown knew exactly what name to give a bizarre new fly species he discovered in the Brazilian Amazon.

"As soon as I saw those bulging legs, I knew I had to name this one after Arnold," says Brown. "Not only is he a major cultural icon and an important person in the political realm, his autobiography gave me some hope that I could improve my body as a skinny teenager." For these reasons, Brown says, the former governor deserves to have the new fly named in his honor.

His research article is published in the open access Biodiversity Data Journal.

The fly is impressive in other ways, Brown explains. "It is known only from one female specimen that we almost overlooked because it is so incredibly small."

In fact, it is the world's smallest known fly, according to Brown, who should know, since he had previously described what was formerly the world's smallest fly, at 0.400 mm in body length. The new fly, named Megapropodiphora arnoldi, is just a fraction smaller, coming in at 0.395 mm.

However, unlike the enlarged forelegs that prompted the naming, the mid- and hind legs appear to be highly reduced, and the wings reduced to tiny stubs.

Even though the fly has not been observed in the wild, Brown concludes that it is clearly a parasitoid, probably of ants or termites, based on its pointed, sharp ovipositor. He further speculates that these flies probably grab onto the hosts and "hold on for dear life" until they reach a nest or colony where they can parasitize their victims more effectively.

Brown has had considerable success finding new species of tiny flies, which he says are "the continuing frontier for insect discovery."

Some of the more obvious, larger insects might have already been described, but by looking at smaller specimens, especially from remote, tropical sites, the entomologist finds that almost everything is new.

Even in his home city of Los Angeles, Brown and collaborators found that almost half of the phorid flies were previously unknown.

For example, it was last year that they finally figured why a secretive fly had been observed around mushrooms with no clear explanation for nearly 30 years. The revelation occurred when L.A. Bed & Breakfast owners Patsy Carter and Lisa Carter-Davis decided to alert entomologists about a phenomenon happening in their yard.

Back in 2016, Brian and his team described at once a total of twelve scuttle fly species new to science after 'field' trips in the backyards of houses around the city of angels. 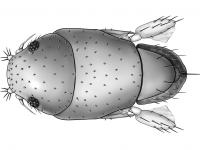