Tropical Storm Eugene has been moving over cooler sea surface temperatures that have been sapping its strength. The Global Precipitation Measurement mission, or GPM, core satellite passed over Eugene and measured its decreasing rainfall rates.

The GPM core observatory satellite had another excellent view of Eastern Pacific tropical storm Eugene on July 10 at 10:31 p.m. EDT (July 11 at 0231 UTC). Eugene was weakening as it traveled toward the northwest over progressively cooler waters. The only remaining strong convective activity was seen in Eugene's northwestern quadrant. GPM's Dual-Frequency Precipitation Radar (DPR) data revealed that some of these convective storms northwest of Eugene's center of circulation were dropping rain at a rate of more than 70 mm (2.8 inches) per hour.

At NASA's Goddard Space Flight Center in Greenbelt, Maryland, a 3-D view of the dissipating tropical storm was developed using GPM's radar (DPR Ku Band). That 3-D cross section through the center of Tropical Storm Eugene showed that the tallest storm tops northwest of Eugene's center were reaching heights of about 11 km (6.8 miles). GPM is a joint mission between NASA and the Japan Aerospace Exploration Agency.

NOAA's National Hurricane Center noted on July 12 at 5 a.m. EDT (0900 UTC) the center of Tropical Storm Eugene was located near 22.9 degrees north latitude and 121.1 degrees west longitude. That's about 505 miles (810 km) southwest of Punta Eugenia, Mexico. Eugene was moving toward the northwest near 9 mph (15 kph), and this general motion is expected to continue over July 13. The estimated minimum central pressure is 1,005 millibars. Maximum sustained winds have decreased to near 40 mph (65 kph) and additional weakening is forecast during the next couple of days.

Despite Eugene's waning strength, the storm is still generating swells along the west coast of the Baja California peninsula and southern California.

These swells are likely to cause life-threatening surf and rip current conditions.

Eugene is expected to degenerate into a remnant low later in the day on July 12. 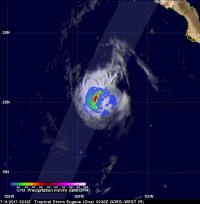