PITTSBURGH—Inspired by the social interactions of ants and slime molds, University of Pittsburgh engineers have designed artificial cells capable of self-organizing into independent groups that can communicate and cooperate. Recently reported in the Proceedings of the National Academy of Sciences (PNAS), the research is a significant step toward producing synthetic cells that behave like natural organisms and could perform important, microscale functions in fields ranging from the chemical industry to medicine.

The team presents in the PNAS paper computational models that provide a blueprint for developing artificial cells—or microcapsules—that can communicate, move independently, and transport "cargo" such as chemicals needed for reactions. Most importantly, the "biologically inspired" devices function entirely through simple physical and chemical processes, behaving like complex natural organisms but without the complicated internal biochemistry, said corresponding author Anna Balazs, Distinguished Professor of Chemical Engineering in Pitt's Swanson School of Engineering.

The Pitt group's microcapsules interact by secreting nanoparticles in a way similar to that used by biological cells signal to communicate and assemble into groups. And with a nod to ants, the cells leave chemical trails as they travel, prompting fellow microcapsules to follow. Balazs worked with lead author German Kolmakov and Victor Yashin, both postdoctoral researchers in Pitt's Department of Chemical and Petroleum Engineering, who produced the cell models; and with Pitt professor of electrical and computer engineering Steven Levitan, who devised the ant-like trailing ability.

Video of this interaction is available on Pitt's Web site and featured below, one of several videos of the artificial cells Pitt has provided. As the signaling cell (right) emits the agonist nanoparticles (shown as blue), the target cell (left) responds with antagonists (shown as red) that stop the first cell from secreting. Once the signaling cell goes dormant, the target cell likewise stops releasing antagonists—which makes the signaling cell start up again. The microcapsules get locked into a cycle that equates to an intercellular conversation, a dialogue humans could control by adjusting the capsules' permeability and the quantity of nanoparticles they contain.

The researchers adjusted the particle output of the signaling cell to create various cell formations, some of which are shown in the videos available on Pitt's Web site and with this release. The first clip—titled "Ant Trail Formation"—shows the trailing "ants," wherein the particle secretions of one microcapsule group are delayed until another group passes by and activates it. The newly awakened cluster then follows the chemical residue left behind by the lead group. 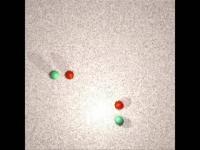 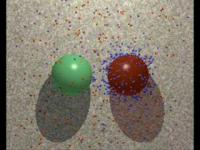