Long before climate change focused global attention on vehicle carbon emissions, regulators were clamping down on NOx because of its detrimental effect on air quality. "Controlling nitrogen-oxide emissions continues to be a real challenge, with ever tightening restrictions on automobiles, trucks, and aviation," says William Roberts, who directs the KAUST Clean Combustion Research Center. "We are continually looking at emerging fuels and trying to develop chemical kinetic mechanisms to predict NOx formation."

In the latest study, Roberts and his colleagues examined NOx emissions from alcohol fuels, such as ethanol. These renewable fuels have gained attention because they are potentially carbon-neutral, but they also produce lower NOx emissions than conventional fossil fuels. Nitrogen oxides can be produced by various pathways, each of which dominates a different stage of combustion, says Myles Bohon, who contributed to the study during his Ph.D. before joining Technische Universität Berlin. "By understanding these pathways and their relative importance, it becomes easier to develop NOx mitigation techniques," Bohon says.

"These types of direct measurements are pretty difficult to pull off," says Bohon. "But they are important because they directly show the differences in the nonthermal NO formation between the two fuel classes." As much as 50 percent less nonthermal NO was produced in the alcohol flames, the researchers observed. They also developed an algorithm to further pinpoint the specific NOx pathway contribution differences between alcohol and alkane fuels.

"Alcohol fuels definitely have applications in internal combustion engines, where alcohols -- ethanol in particular -- are added to gasoline," says Bohon. "There is a lot of potential to use fuel blends to mitigate NOx," he adds. 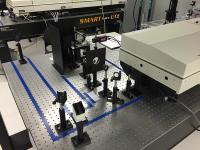