For more than 40 years, Stanislav Filatov, Professor at St Petersburg University, together with colleagues from other research institutions in Russia, has been studying the mineralogy of scoria cones and lava flows of fumaroles in Kamchatka. They were formed after two major eruptions of Tolbachik Volcano - in 1975-1976 and 2012-2013. This territory is unique in its mineralogical diversity. In recent years, researchers have discovered dozens of new minerals here, many of which are one-of-a-kind in the world.

The recent find by the scientists from St Petersburg University, petrovite, Na10CaCu2(SO4)8, occurs as blue globular aggregates of tabular crystals with gaseous inclusions. 'The copper atom in the crystal structure of petrovite has an unusual and very rare coordination of seven oxygen atoms. Such coordination is characteristic of only a couple of compounds, as well as of saranchinaite, which was discovered by our colleagues from St Petersburg University - the research team of Professor Oleg Siidra,' said the project manager, Professor Stanislav Filatov.

The mineral consists of oxygen atoms, sodium sulphur and copper, which form a porous framework. The voids are connected to each other by channels through which relatively small sodium atoms can move. The scientists have therefore established that the structural type of petrovite is promising for ionic conductivity and can be used as a cathode material for sodium ion batteries.

'At present, the biggest problem for this use is the small amount of a transition metal - copper - in the crystal structure of the mineral. It might be solved by synthesising a compound with the same structure as petrovite in the laboratory,' said Stanislav Filatov.

Despite the fact that most of the recent discoveries of mineralogists and crystallographers of St Petersburg University are associated with the Kamchatka Peninsula, scientists discover many new minerals in the most unusual places. Among the finds in 2008-2017 there are samples from polar Yakutia, the Kola Peninsula (Kovdor deposit), Israel (the Negev Desert), Greece, Tanzania, South Africa, Jordan and many others. More information about these discoveries can be found at the virtual exhibition of the Mineralogical Museum of St Petersburg University on the IZI.Travel platform. 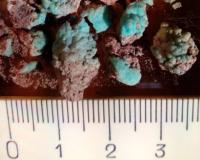