Climate change will cause Europe to lose much of its biodiversity as projected by a comprehensive study on future butterfly distribution. The Climatic Risk Atlas of European Butterflies predicts northward shifts in potential distribution area of many European butterfly species. As early warning indicators of environmental change, butterflies are a valuable tool to assess overall climate change impact and to provide some indication on the chances to come nearer to the target of halting the loss of biodiversity by 2010 set by the EU Heads of State in 2001.

The Climatic Risk Atlas of European Butterflies is based on the work of scores of scientists from across Europe. They applied climate change models to data collected by tens of thousands of volunteers.

The authors say that some climate change is now inevitable and that the extent of the losses will depend on the degree of that change and how we respond to the new threat. Butterflies have already suffered huge losses across Europe following decades of habitat loss and changing farming and forestry practices.

As temperatures rise, majority of butterfly species will try to head north. This won't always be achievable. The forestry and farming changes mean that areas of suitable habitat are now often small and too far apart for butterflies to travel between them.

The worst-case scenario scientists examined sees the average European temperature rise by 4.1ºC by 2080. In that case over 95 per cent of the present land occupied by 70 different butterflies would become too warm for continued survival.

The best case-scenario sees a 2.4ºC temperature rise. Even this would mean that 50 per cent of the land occupied by 147 different butterflies would become too warm for them to continue to exist there.

Many butterflies will largely disappear from where they are regularly seen now. The Small Tortoiseshell will become absent from a huge swathe of middle and southern Europe and will become restricted to northern Europe. Under the worst-case scenario, rare species like the Spanish Festoon Zerynthia rumina would experience a 97% loss from Spain and Southern France, and the Apollo Parnassius apollo would suffer a 76% loss from mountainous areas.

Climate change is already having an impact on butterflies. Over 60 mobile species with widespread food-plants are known to have spread north in Europe over recent decades, including the Comma Polygonia c-album, which is spreading north in the UK at 10km per year. Other species have moved further up mountains.

The chief author of Climatic Atlas of European Butterflies is Dr Josef Settele from the Helmholtz Centre for Environmental Research (UFZ) in Germany. He said: "The Atlas shows for the first time how the majority of European butterflies might respond to climate change. Most species will have to shift their distribution radically to keep pace with the changes. The way butterflies change will indicate the possible response of many other insects, which collectively comprise over two-thirds of all species."

Dr Martin Warren, Chairman of Butterfly Conservation Europe and one of the authors, said "Evidence points to an acceleration in climate change after 2050 unless there is a significant decrease in global CO2 emissions. This accelerated change would be the final nail in the coffin for many European species. We need to be ready for this worst-case scenario. We need place more emphasis on maintaining large, diverse populations on existing habitats while re-connecting habitats to allow species to move across the landscape. This means working closely with farmers and planners."

Dr Ladislav Miko, Director of Nature Conservation at the EU Environment Directorate in Brussels, said: "We strongly welcome this important study which helps us understand how species might respond to climate change. The evidence points to a radical change in species' distribution, which we must plan for within future European policies. The results show the enormous scientific value of records from thousands of volunteers across Europe."

Sebastian Winkler, Head of Countdown 2010, stated "The astounding outcomes of this study should remind world leaders once more that if immediate action is not taken, the 2010 biodiversity target will not be reached and biological diversity will continue to decline."

The Climatic Risk Atlas of European Butterflies is published by Pensoft - a science publisher based in Sofia, Bulgaria - and can be viewed online at www.pensoftonline.net/biorisk . It was written by researchers from across Europe under the EU Sixth Framework programme projects: ALARM (Assessing Large-scale Environmental Risks for biodiversity with tested Methods) www.alarmproject.net and MACIS (Minimisation of and Adaptation to Climate change Impacts on biodiversity) www.macis-project.net 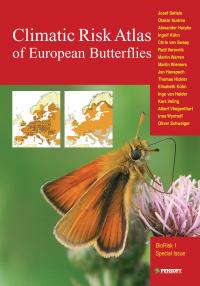