A new study by a Swansea University academic has announced a new mathematical formula that will help engineers assess the point at which cellular materials, which are used a wide range of applications ranging from aerospace to the construction industry, will bend and buckle.

Professor Sondipon Adhikari, of the College of Engineering has published his findings in the Proceedings of the Royal Society A. The study details a formula that can calculate the elastic instability of cellular material, in this case hexagonal lattice material, also known as the honeycomb which is commonly used in the production of lightweight structures such as energy absorbent foams, mechanical and acoustic metamaterials and next-generation stent technology.

Professor Adhikari's formula, which is a simple closed-form expression, will help engineers make quick design calculations and can also be used to benchmark future experimental and numerical studies.

Professor Adhikari said: "This paper is the result of two years of sustained research. The simple closed-form expression for critical buckling stress can be viewed as the extension of the classical Euler's critical load formula, first derived in 1757 which calculated the stress point at which a beam will suddenly bend and buckle. This new expression is a 21st century solution for engineering cellular materials that will be used in advanced engineering applications now and in the future." 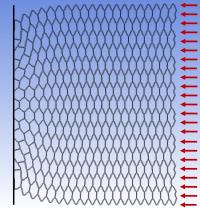