Nuclear shape abnormalities are frequently observed in human diseases like cancer. Specifically, nuclear abnormalities called micronuclei (small nuclear structures in proximity to the main nucleus) and nuclear blebs (protrusions of the main nucleus) can lead to a severe impact on genomic DNA integrity (see Fig. 2). These abnormalities have historically been used as a diagnostic and prognostic tool for several cancers, such as breast cancer. Nevertheless, the precise molecular mechanisms behind their formation are not fully understood.

Absence of MOF causes a stochastic loss of nuclear shape

In their latest study, the lab of Max Planck director Asifa Akhtar discovered a spontaneous accumulation of micronuclei and nuclear blebs in primary cells after the loss of the epigenetic regulatory enzyme called MOF. This well-characterized enzyme facilitates the accessibility of genetic material by modifying histones, which are the proteins on which the DNA is wrapped around within the nucleus. "MOF deposits acetyl-groups on the histones. This opens the chromatin, the packaging of the DNA, and enables gene activity and thus the encoding of proteins. We wondered what could be the link between the classical epigenetic regulator MOF and the abnormal nuclear blebs and micronuclei," explains Asifa Akhtar.

To investigate this question, her team, led by PhD student Adam Karoutas, performed an unbiased identification of the full spectrum of proteins which are acetylated by MOF in the cell. Their analysis revealed that MOF targets not only histone proteins but also the nuclear lamina protein Lamin A/C. Furthermore, the team identified the MOF associated NSL complex responsible for Lamin A/C acetylation. Lamin A/C is one of the building blocks of the mesh-structured nuclear lamina that acts as a viscoelastic shell for the nucleus. The study revealed that loss of Lamin A/C acetylation results in softened nuclei that are prone to mechanical pressure and eventually to breaking. Nuclear blebs and micronuclei are far more likely to be formed under these conditions.

Genomic breakdown in the nucleus

"These nuclear blebs and segregated micronuclei pose a risk to the integrity of cell's genetic material. When we sequenced the genomic DNA of the primary cells that lack MOF, we found a battle ground," says Adam Karoutas, the first author of the publication.

The researchers saw that nuclear architecture collapse shreds parts of the cell's chromosomes while other parts remain completely untouched. Segments of individual chromosomes were broken at many points and reassembled incorrectly. Whole parts were missing, while others were duplicated or reincorporated in the wrong orientation. Scientists and clinicians use the term "chromothripsis" (chromo for chromosome and thripsis is Greek for shattering) to describe this genomic disaster. "Such fatal events are associated with congenital diseases and occur in 20-30% of highly aggressive cancers. However, for the first time, we were able to observe chromothripsis in primary cells that lack only MOF," says Adam Karoutas.

The desperate attempt of the cell's DNA repair mechanisms to reassemble the fragments and repair the damage leads to mutations that eventually cause cell division and cell death to get out of control. In an attempt to understand the underlying molecular mechanisms behind this phenomenon, the researchers investigated the epigenetic landscape of the nuclear abnormalities. To their surprise, they found that it was totally different in nuclear blebs and micronuclei compared to their adjacent main nuclei.

An epigenetic mechanism on damage control

"While the main nuclei presented an equilibrium of regions of "loosely packed" and "tightly packed" DNA termed euchromatin and heterochromatin respectively, we observed that DNA within micronuclei and nuclear blebs was mainly in the heterochromatin state. This tighter and denser packed form of DNA is thought principally to suppress gene activity," says Adam Karoutas.

The scientists termed this newly observed phenomenon as Heterochromatin Enrichment in Nuclear Abnormalities (HENA). Just like HENA decorating a hand, histone modifications were covering the DNA within nuclear abnormalities. "Most strikingly, HENA seems to have an impact on gene transcription. It shuts down the process by which DNA is used as a template to make RNA. Thus, genes which are "trapped" within nuclear abnormalities and are potentially damaged, are simply switched off rather than being expressed. We suggest that HENA may play a protective role in cells that accumulate nuclear abnormalities and could become carcinogenic," explains Asifa Akhtar.

Preventing the road to catastrophe

The scientists hope that future work will determine the role played by the epigenetic mechanism HENA in diseases associated with nuclear abnormalities, such as cancer or upon ageing. Another promising line of research is the pharmacological alteration of Lamin A/C acetylation. "We tested histone deacetylase inhibitors. These are epigenetic drugs already used in cancer therapy. They function by increasing overall protein acetylation. In our first trials in mammalian cells, we observed an increase of Lamin A/C acetylation that rescued nuclear abnormalities compared to cells lacking MOF," says Adam Karoutas. "How MOF-dependent Lamin A/C acetylation is regulated in living organisms is not understood. Thus, a complete characterization of this discovery in mouse models in different tissues or upon ageing would be the next logical step and provides an exciting possibility of unraveling the therapeutic potential in future." says Asifa Akhtar.

Earthquake in the cell 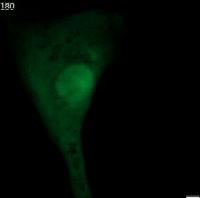