The first humans to pluck a Caribbean fighting conch from the shallow lagoons of Panama's Bocas del Toro were in for a good meal. Smithsonian scientists found that 7,000 years ago, this common marine shellfish contained 66 percent more meat than its descendants do today. Because of persistent harvesting of the largest conchs, it became advantageous for the animal to mature at a smaller size, resulting in evolutionary change.

Human-driven evolution of wild animals, sometimes referred to as "unnatural selection," has only previously been documented under scenarios of high-intensity harvesting, like industrialized fishing. "These are the first evidence that low-intensity harvesting has been sufficient to drive evolution," said lead author Aaron O'Dea of the Smithsonian Tropical Research Institute. "The reason may be because the conch has been subjected to harvesting for a long period of time." Published March 19 in Proceedings of the Royal Society B, the findings are based on a comparison of mature shell sizes prior to human settlement, from shells excavated from human trash heaps representing various points in the last few thousand years and from modern sites.

As a juvenile, the fighting conch Strombus pugilis lives hidden in the muddy sediments of lagoons. It emerges to compete for mates when it reaches sexual maturity, but only after it has thickened up its outer lip as a protection from predators. By observing the size of shells and the thickness of lips in fossil, archeological and modern conchs the researchers found that size at sexual maturity declined during the past 1,500 years in concert with human harvesting.

The study brought together ecologists, paleontologists and archeologists to expose the effects of long-term subsistence harvesting on an important marine resource. Co-authors include Marian Lynne Shaffer, at the time an undergraduate student of the University of Wisconsin-Green Bay, and archeologist Thomas Wake of UCLA's Cotsen Institute of Archeology.

The team suggests that declining yields may not be the only detrimental effects of an evolutionary change to mature at smaller size. The ability to reproduce, the quality of offspring and other vital traits can be damaged by size-selective evolution. Further study is required to learn the extent to which the fitness of S. pugilis has decreased because of long-term size-selective evolution.

"There is a glimmer of hope that the evolutionary trend toward smaller size can be halted or reversed," said O'Dea, drawing attention to the fact that modern sites that are protected from harvesting have the largest conchs. "Marine protected areas not only serve to protect biodiversity, they can also help maintain genetic diversity. This study shows that such genetic diversity is critical to sustain value of marine resources for the millions of humans that rely upon subsistence harvesting around the world."

The Smithsonian Tropical Research Institute, headquartered in Panama City, Panama, is a unit of the Smithsonian Institution. The Institute furthers the understanding of tropical nature and its importance to human welfare, trains students to conduct research in the tropics and promotes conservation by increasing public awareness of the beauty and importance of tropical ecosystems. Field research for this project was coordinated out of at STRI's Bocas del Toro Research Station. Website: http://www.stri.si.edu. 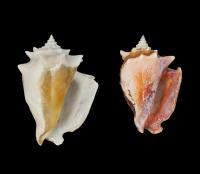