A team of scientists and undergraduate students have analyzed the body size for 25 marine species, including whales, sharks, squids, and other ocean giants. The project elucidates both the challenges of arriving at exact measurements and the human bias toward larger individuals.

"Several years ago I noticed that people kept staying that giant squids reached 60 feet in length, which is amazingly long," says Craig McClain, the assistant director of the National Evolutionary Synthesis Center in Durham, N.C., and the primary author of the paper. "When I started actually looking at the data, I found that that estimate was actually quite unrealistic."

McClain explained that the muscle fibers in squids loosen and stretch during decomposition, which could account for the measurement of specimens found ashore in the 1800s. This new research indicates that the longest scientifically verified length is estimated at 12 meters (nearly 40 feet).

"It's one part a databasing effort and one part historical research: double-checking museum specimens; talking with other scientists and collectors; and even checking eBay for specimens for sale," McClain says.

To cast a wider net, he invited graduate and undergraduate students to join the project and select the marine species that most fascinated them. The results of their collective research will be published Tuesday, January 13 to PeerJ.

The species range from well-known behemoths like the Great White Shark, Giant Octopus, and walrus to more obscure creatures such as the Giant Tubes Worm and the Colossal Squid.

Meghan Balk, a coauthor and Ph.D. candidate at the University of New Mexico, researched the Southern Elephant Seal, as well as several shark species. For her, the study illustrated the great variability of size within a single species.

"What people think of as the biggest representatives aren't usually the most optimal," Balk says. "It says a lot about what it means to be large. How beneficial is it to be the biggest in a big species?"

Bigger isn't always better. The tallest man in recorded history, Robert Wadlow, stood at 2.72 meters (nearly 9 feet), which is far from the average human height. Individuals like Wadlow often had shortened lifespans because of health complications related to their size.

Marine megafauna can also fall into a wide range of sizes within the same species.

"It's fascinating as to why there is size variation [and] why everything isn't less skewed," Balk says. "How many sizes does an organism go through from the time it's born to the time it's an adult?" She explains that while mammals eat the same diet throughout their lives, animals like fish, sharks, and turtles eat different foods as they grow. For these species, size has a cascading effect within marine food webs.

The authors also considered environmental factors that could give rise to bigger species, as well as situations in which a larger size would be beneficial. For example, the Giant Clam can reach lengths of 1.37 meters (4.5 feet) because it receives additional nourishment from symbiotic photosynthetic bacteria. Similarly, larger Whale Sharks and Blue Whales are less susceptible to starvation: If a habitat is depleted of food, these filter-feeders have the mass to support a migration and subsequent fasting to reach more plankton-rich waters.

"Metabolism is a function of size because it indicates how much oxygen and carbon an animal consumes," McClain says. "Knowing whether a whale shark is 10 tons, 15 tons, or 20 tons lets us know how many light bulbs worth of energy it uses every day."

In tackling a search that would become quite gigantic itself, the authors contacted fisheries, marine centers, and other scientists.

"This is one of my first experiences in doing research in such a collaborative setting," says Catherine Chen, a coauthor and Duke University junior who investigated the Blue Whale, Sperm Whale, and Ocean Sunfish. "I got to work with the International Whaling Commission's datasets, which allowed me to look and play with over 200 years of whale capture data."

Social media also proved advantageous to the project. McClain created a website, The Story of Size, where the authors posted regularly. The students promoted their work by sharing updates and their own impressions. With posts like, "Why You Should Give a Damn about a Giant Clam," the site added a playful tone to the scientific discourse and also made the project more accessible to the general public.

"Having them write everything as a report is probably a disservice. Those are different styles of writing that require different techniques," McClain says. "The big question is: Can you do research and outreach at the same time and not have it become a burden?"

The students were also required to tweet about their research, which for some, including Chen, meant creating their first Twitter accounts.

"Twitter's really good for reaching out to the general public but also for talk between scientists," Chen says. Through Twitter she met Trevor Branch, a professor of aquatic and fishery science at the University of Washington. Branch was able to help Chen with data on Blue Whales and even became a coauthor of the paper.

While academics including Branch and institutions like the IWC welcomed the opportunity to share their data, some sources were reluctant. The team hopes their work will help shift the attitude toward open access in a more favorable direction.

"A lot of questions that we sought to answer are still not answered either because of lack of research or lack of access," Balk says. "I think that this paper will open up discussions about collecting and sharing data to gain a broader understanding of a species."

Despite challenges, McClain is pleased with his team's results, which he thinks will slowly replace the erroneous measurements found in academic papers, fishery databases, textbooks, and more.

"Precise, accurate, and quantified measurements matter at both a philosophical and pragmatic level," McClain says. "Saying something is approximately 'this big,' while holding your arms out won't cut it, nor will inflating how large some of these animals are."

Link to the press preview of the original article (Note: This is an author proof and so may change slightly before publication): http://static.peerj.com/press/previews/2015/01/715.pdf

Sizing up giants under the sea 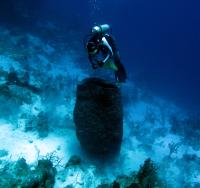 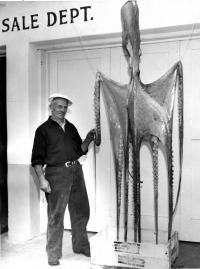