Hurricane Maria has caused catastrophic flooding in Puerto Rico and left a wake of heavy rainfall that NASA measured using a fleet of satellites in space. NASA satellite imagery also saw Maria's eye close up as it tracked across Puerto Rico and re-open after its exit.

The Global Precipitation Measurement mission or GPM core satellite, a joint mission between NASA and the Japan Aerospace Exploration Agency can measure rainfall from space. That rainfall data, combined with data from other satellites provided a tally of Hurricane Maria's rainfall over the course of several days.

Extreme flooding was reported in the streets of San Juan, the capital of Puerto Rico. The National Weather Service issued flash flood warnings for the entire island. Hurricane Maria has now moved to the northwest of Puerto Rico but is still expected to contribute to rainfall over the island on Friday. Feeder bands of thunderstorms are transporting rain over Puerto Rico and the Dominican Republic even as the hurricane moves toward the Turks and Caicos Islands.

Hurricane Maria made landfall near Yabucoa, Puerto Rico, around 6:15 a.m. EDT/AST on Sept. 20. Maximum sustained winds in the hurricane were reported to be 149.5 mph (130 knots) as Maria moved toward San Juan, Puerto Rico.

On Sept. 21 at 1:54 a.m. EDT (0554 UTC) the VIIRS instrument aboard NASA-NOAA's Suomi NPP satellite provided a thermal image of Hurricane Maria after it re-emerged eye moved off the coast of Puerto Rico and as just northeast of Hispaniola. The image showed that the eye had become visible again and powerful thunderstorms with very cold cloud tops surrounded it's eye.

Another infrared image of Hurricane Maria was taken from the Atmospheric Infrared Sounder or AIRS instrument aboard NASA's Aqua satellite on Sept. 21 at 2:05 a.m. EDT (0605 UTC). Maria's eye opened up, and there were clear areas where the sea surface shows through. Powerful thunderstorms circle the large eye where cloud top temperatures of strong thunderstorms in Maria's eyewall as cold as or colder than minus 63 degrees Fahrenheit (minus 53 Celsius).

Warnings and Watches in Effect on Sept. 21

Location and Status of Maria on Sept. 21

At 11 a.m. EDT/AST (1500 UTC), the large eye of Hurricane Maria was located near 20.2 north latitude and 69.1 degrees west longitude. That's about 105 miles (175 km) east-northeast of Puerto Plata, Dominican Republic and about 155 miles (255 km) southeast of Grand Turk Island. Maria is moving toward the northwest near 9 mph (15 kph), and this general motion is expected to continue through tonight. The minimum central pressure based on aircraft data is 960 millibars.

The NHC said "A turn toward the north-northwest is forecast early Friday, with that motion continuing through early Saturday. On the forecast track, Maria's eye will continue to pass offshore of the northern coast of the Dominican Republic today, and then move near or just east of the Turks and Caicos Islands and southeastern Bahamas tonight and on Friday, Sept. 22. 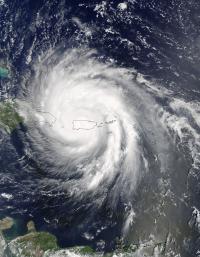 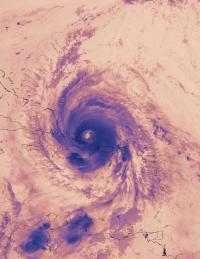