Generally speaking, language processing is a job for the brain's left hemisphere. That's true whether that language is spoken, written, or signed. But researchers reporting in the Cell Press journal Current Biology on August 17 have discovered an exception to this rule in a most remarkable form: whistled Turkish.

"We are unbelievably lucky that such a language indeed exists," says Onur Güntürkün of Ruhr-University Bochum in Germany. "It is a true experiment of nature."

Whistled Turkish is exactly what it sounds like: Turkish that has been adapted into a series of whistles. This method of communicating was popular in the old days, before the advent of telephones, in small villages in Turkey as a means for long-distance communication. In comparison to spoken Turkish, whistled Turkish carries much farther. While whistled-Turkish speakers use "normal" Turkish at close range, they switch to the whistled form when at a distance of, say, 50 to 90 meters away.

"If you look at the topography, it is clear how handy whistled communication is," Güntürkün says. "You can't articulate as loud as you can whistle, so whistled language can be heard kilometers away across steep canyons and high mountains."

"As a native Turkish-speaking person, I was struck that I did not understand a single word when these guys started whistling," he says. "Not one word! After about a week, I started recognizing a few words, but only if I knew the context."

Whistled Turkish is clearly fascinating in its own right, but Güntürkün and his colleagues also realized that it presented a perfect opportunity to test the notion that language is predominantly a left-brained activity, no matter the physical structure that it takes. That's because auditory processing of features, including frequency, pitch, and melody--the stuff that whistles are made of--is a job for the right brain.

The researchers examined the brain asymmetry in processing spoken versus whistled Turkish by presenting whistled-Turkish speakers with speech sounds delivered to their left or right ears through headphones. The participants then reported what they'd heard. While individuals more often perceived spoken syllables when presented to the right ear, they heard whistled sounds equally well on both sides.

That's important, the researchers say, because it means that the left-hemispheric dominance in language does depend on the physical structure the language takes. They now plan to conduct EEG studies to look even more closely at the underlying brain processes in whistled-Turkish speakers.

The research was supported by the Deutsche Forschungsgemeinschaft.

Whistled Turkish challenges notions about language and the brain 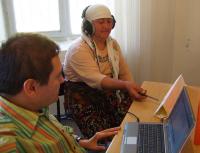 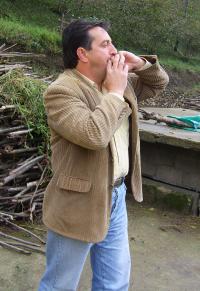