Campaigns to plant huge numbers of trees could backfire, according to a new study that is the first to rigorously analyze the potential effects of subsidies in such schemes.

The analysis, published on June 22 in Nature Sustainability, reveals how efforts such as the global Trillion Trees campaign and a related initiative (H. R. 5859) under consideration by the U.S. Congress could lead to more biodiversity loss and little, if any, climate change upside. The researchers emphasize, however, that these efforts could have significant benefits if they include strong subsidy restrictions, such as prohibitions against replacing native forests with tree plantations.

"If policies to incentivize tree plantations are poorly designed or poorly enforced, there is a high risk of not only wasting public money but also releasing more carbon and losing biodiversity," said study co-author Eric Lambin, the George and Setsuko Ishiyama Provostial Professor in Stanford's School of Earth, Energy & Environmental Sciences. "That's the exact opposite of what these policies are aiming for."

There is no question that forests have an outsized role to play in efforts to slow global biodiversity loss and combat climate change by sequestering carbon as biomass. So it makes sense that tree-planting as a solution has gained traction in recent years with ambitious commitments, such as the Bonn Challenge, which seeks to restore an area of forest more than eight times the size of California by 2030, and Trillion Trees, which seeks to plant as many trees as its name implies.

A closer look reveals faults in the optimistic plans. For example, nearly 80 percent of commitments to the Bonn Challenge involve planting monoculture tree plantations or a limited mix of trees that produce products such as fruit and rubber rather than restoring natural forests. Plantations typically have significantly less potential for carbon sequestration, habitat creation and erosion control than natural forests. The potential benefit dwindles further if planted trees replace natural forests, grasslands or savannahs - ecosystems that have evolved to support unique, local biodiversity.

In the new study, the researchers critically examined another aspect of some mass-tree planting efforts: subsidies designed to encourage private landowners to plant trees. Such payments are widely proposed as a promising solution to a variety of environmental challenges. So, the scientists looked at one of the world's longest running and most influential afforestation subsidy policies, Chile's Decree Law 701. The law, in effect from 1974 to 2012 and currently being considered for reintroduction, has served as the model for similar policies in a number of South American countries and international development projects.

"In light of global enthusiasm to plant a trillion trees, it's important to reflect on the impact of past policies," said lead author Robert Heilmayr, an assistant professor at UCSB, who worked on the study while a PhD student in the Emmett Interdisciplinary Program in Environment and Resources at Stanford's School of Earth, Energy & Environmental Sciences. "Chile's experience can help us understand the climate, ecological and economic impacts that might occur when governments pay landowners to establish massive tree plantations."

Chile's Decree Law 701 subsidized 75 percent of afforestation costs and provided support for ongoing plantation management. Lax enforcement and budgetary limitations hobbled prohibitions on the use of subsidies on already-forested lands, leading to situations in which the government subsidized the replacement of native forests with profitable tree plantations. Anecdotal evidence indicated the law's subsidies further reduced native forest cover by encouraging the establishment of plantations on shrublands or marginal agricultural lands where forests might have naturally regenerated.

The researchers set out to quantify the full impact of the afforestation subsidies and calculate their effects on net carbon and biodiversity changes across the entire country. They compared the area of Chilean forests under three scenarios: actual observed subsidy patterns, no subsidies and subsidies combined with fully enforced restrictions on the conversion of native forests to plantations. They found that, relative to a scenario of no subsidies, afforestation payments expanded the area covered by trees, but decreased the area of native forests. Since Chile's native forests are more carbon dense and biodiverse than plantations, the subsidies failed to increase carbon storage, and accelerated biodiversity losses.

"Nations should design and enforce their forest subsidy policies to avoid the undesirable ecological impacts that resulted from Chile's program," said study coauthor Cristian Echeverría, a professor at the University of Concepción in Chile. "Future subsidies should seek to promote the recovery of the many carbon- and biodiversity-rich natural ecosystems that have been lost."

Lambin is also a senior fellow at the Stanford Woods Institute for the Environment.

The research was supported by the National Science Foundation, the Robert and Patricia Switzer Foundation and the Emmett Interdisciplinary Program for Environment and Resources in Stanford's School of Earth, Energy & Environmental Sciences.

When planting trees threatens the forest 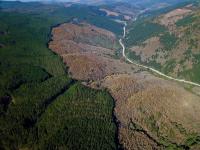