A professor emerita of mathematics at The University of Texas at Austin has received mathematics' top international award for the year. The Norwegian Academy of Science and Letters has named Karen Uhlenbeck its 2019 Abel Prize award winner.

The prestigious international award, modeled after the Nobel Prize, comes with a monetary award of 6 million Norwegian kroner, approximately $700,000.

"For more than three decades at The University of Texas, Karen Uhlenbeck conducted research that revolutionized geometric analysis and mathematics as a whole" said President Gregory L. Fenves. "She was an inspiring teacher and dedicated mentor to thousands of UT students, motivating them to reach great heights in their academic and professional lives. The Abel Prize is the highest honor in mathematics, and it is one that Professor Uhlenbeck richly deserves."

Uhlenbeck was cited "for her pioneering achievements in geometric partial differential equations, gauge theory and integrable systems, and for the fundamental impact of her work on analysis, geometry and mathematical physics." Her work has been described as some of the most important in 20th century mathematics, constituting revolutionary advances in geometry.

The President of the Norwegian Academy of Science and Letters, Hans Petter Graver, announced the winner of the Abel Prize at the academy in Oslo today. Norway's King Harald V will present the Abel Prize to Uhlenbeck at an award ceremony in Oslo on May 21.

Some of her most noted work focused on gauge theories, providing an analytical foundation for a number of concepts explored in modern physics.

"Uhlenbeck's research has led to revolutionary advances at the intersection of mathematics and physics," said Paul Goldbart, dean of the College of Natural Sciences and a professor of physics. "Her pioneering insights have applications across a range of fascinating subjects, from string theory, which may help explain the nature of reality, to the geometry of space-time."

One of the premier mathematicians of her generation, Uhlenbeck in 1983 received a MacArthur Fellowship (sometimes referred to as a "genius award"). In 1986 she was elected to the National Academy of Sciences, and in 2000 she was awarded the National Medal of Science. In 2007 she received the Steele Prize for a Seminal Contribution to Research from the American Mathematical Society.

"She transformed the fabric of the department with her broad view of mathematics and beyond," said Thomas Chen, chair of the Department of Mathematics at UT Austin. "Her insatiable curiosity fuels both her deep vision in mathematics and wisdom in the human sphere, which is evident in her legendary generosity and attention to mentoring young mathematicians."

Outreach and mentoring have also been passions for Uhlenbeck, who says, "Seeing the success of students is its own reward." She co-founded programs at both Princeton University and UT Austin, including the Saturday Morning Math Group, the Distinguished Women in Mathematics Lecture Series, the Park City Mathematics Institute and the Women and Mathematics program at the Institute for Advanced Study, designed to inspire and support young people in mathematics.

Since shortly after she arrived at UT Austin in 1987 through her retirement in 2014, Uhlenbeck has held the Sid W. Richardson Foundation Regents Chair in Mathematics.

The Abel Prize recognizes achievements in mathematics at any stage of a mathematician's career. It differs from the Fields Medal, another international prize in math, which is given only to mathematicians younger than 40. The two prizes are considered the highest international awards in mathematics, and during the past year the University of Texas math program celebrated both. Former faculty member Alessio Figalli was among the 2018 Fields Medalists in recognition of work he did while on the Austin campus.

Since the Abel Prize was first awarded in 2003, one other UT Austin faculty member has been among its recipients: professor emeritus John Tate in 2010. 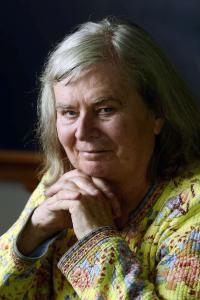