Toronto / Harare - Their offices are simple wooden seats, called Friendship Benches, located in the grounds of health clinics around Harare and other major cities in Zimbabwe.

The practitioners are lay health workers known as community "Grandmothers," trained to listen to and support patients living with anxiety, depression and other common mental disorders.

But the impact, measured in a ground-breaking study, shows that this innovative approach holds the potential to significantly improve the lives of millions of people with moderate and severe mental health problems in countries where access to treatment is limited or nonexistent.

Funded by the Government of Canada through Grand Challenges Canada, the randomised controlled trial was conducted by the University of Zimbabwe, the London School of Hygiene & Tropical Medicine and King's College London. The study is published today in JAMA, the world's most widely-circulated medical journal.

The Friendship Bench intervention was also shown to be well suited to improve health outcomes among highly vulnerable individuals. 86 percent of the study's participants were women, over 40 percent were HIV positive, and 70 percent had experienced domestic violence or physical illness.

Lead author of the study Dr. Dixon Chibanda, a consultant psychiatrist in Harare, co-founded the Friendship Bench network in response to the appalling shortage of evidence-based treatment for people with mental disorders in Zimbabwe, a problem common throughout Africa.

While about 25 percent of the country's primary care patients suffer from depression, anxiety and other common mental disorders, Zimbabwe (population 15 million) has only 10 psychiatrists and 15 clinical psychologists.

"Common mental disorders impose a huge burden on all countries of sub-Saharan Africa," says Dr. Chibanda. "Developed over 20 years of community research, the Friendship Bench empowers people to achieve a greater sense of coping and control over their lives by teaching them a structured way to identify problems and find workable solutions."

With CDN $1 million in funding from Grand Challenges Canada earlier this year, the Friendship Bench has since been scaled to 72 clinics in the cities of Harare, Gweru and Chitungwiza (total population 1.8 million). Through collaborating with a Médecins Sans Frontières psychiatric program in Zimbabwe, the Friendship Bench is working to create the largest comprehensive mental health program in sub-Saharan Africa.

To date, over 27,500 people have accessed treatment.

"In many parts of Africa, if you are poor and mentally ill, your chances of getting adequate treatment are close to zero," says Dr. Karlee Silver, Vice President Programs at Grand Challenges Canada. "In Zimbabwe, that's changing thanks to the Friendship Bench, the first project with the potential to make mental health care accessible to an entire African nation."

In 2017, the team will focus on expanding the model to reach other vulnerable populations, including youth and refugees. In partnership with the Swedish NGO SolidarMed, the team intends to expand implementation of this model in Masvingo province and subsequently in the refugee centres of the eastern highlands on the border with Mozambique.

"The Friendship Bench team, working with the Zimbabwe Ministry of Health, has been able to substantially scale up services for some of the most deprived people in the community," says Dr. Shekhar Saxena, Director of Mental Health and Substance Abuse at the World Health Organization. "By supporting the uptake of mental health innovations like the Friendship Bench, Canada is helping to turn the tide in the global mental health challenge."

The study, published today in JAMA and supported by Grand Challenges Canada, was conducted from September 2014 to June 2015, and involved:

Identifying participants at 24 primary care clinics in Harare, divided into an intervention group (287 participants) and a control group (286). Total participants: 573.

Grand Challenges Canada is dedicated to supporting Bold Ideas with Big Impact® in global health. We are funded by the Government of Canada and we support innovators in low- and middle-income countries and Canada. The bold ideas we support integrate science and technology, social and business innovation - we call this Integrated Innovation®. Grand Challenges Canada focuses on innovator-defined challenges through its Stars in Global Health program and on targeted challenges in its Saving Lives at Birth, Saving Brains and Global Mental Health programs. Grand Challenges Canada works closely with Canada's International Development Research Centre (IDRC), the Canadian Institutes of Health Research (CIHR) and Global Affairs Canada to catalyze scale, sustainability and impact. We have a determined focus on results, and on saving and improving lives. http://www.grandchallenges.ca 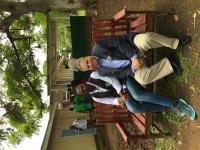