According to the Sandy Child and Family Health Study, a major representative population study of 1 million New Jersey residents living in Sandy's path, over 100,000 New Jersey residents experienced significant structural damage to their primary homes from Superstorm Sandy. Based on findings released from this study, which was conducted by Rutgers University and New York University (NYU), in collaboration with Columbia University and Colorado State University, among those New Jersey residents whose homes suffered such damage, 27% are experiencing moderate or severe mental health distress and 14% report the signs and symptoms of PTSD even two and a half years after the storm.

"Recovery, or stalled recovery, is not as dramatic as the storm and the initial response," noted Dr. David Abramson, the study's principal investigator. "But it is what exacts the greatest toll both financially and psychologically. Sandy may have occurred nearly three years ago, but it has had an enduring impact on those individuals and communities exposed to it," he said.

Among the study's objectives were to help the state identify the health and well-being of residents exposed to the storm and to begin to identify unmet needs.

"The state always knew recovery from Superstorm Sandy would take years," New Jersey Health Commissioner Mary O'Dowd said. "In the aftermath of Sandy, the Department of Health recognized the need for research and so we funded this study so we could hear the concerns of recovering families and modify our ongoing Sandy programs to better address the needs of those who are still coping with recovery issues. For example, the Department recently extended programs for behavioral health assistance and lead screening for another year."

"It was striking to us and to our field team of over 30 interviewers how Sandy still dominated the lives of so many New Jersey residents," added Rutgers University's Dr. Donna Van Alst, the study's co-Principal Investigator, "even two and a half years after the event. People across the economic spectrum were affected." Other findings from the study revealed that:

The findings from this study are based on face-to-face surveys with 1,000 randomly sampled New Jersey residents living in the state's nine most-affected counties. The research team from the four universities deployed a team of nearly three-dozen community-based interviewers to conduct the surveys. In addition, the team used flood storm surge data and housing damage data to identify a "disaster footprint," the geographic area within New Jersey that was exposed to Sandy.

The 1,000-person sample was drawn so as to be representative of the 1,047,000 residents living in this Disaster Footprint. The footprint extends from Cape May in the south of the state to several miles north of the George Washington Bridge, and stretches from the shoreline to over 20 miles inland.

The study is modeled upon a similar five-year study conducted by Abramson and Columbia University's National Center for Disaster Preparedness in Louisiana and Mississippi after Hurricane Katrina, the Gulf Coast Child and Family Health Study. The Sandy study was funded by the New Jersey Department of Health using Social Services Block Grant (SSBG) - Sandy Supplemental funds. Department of Health Commissioner O'Dowd recognized this study as an opportunity to gain valuable, unprecedented insight on the public health impact of the storm on New Jersey residents and to guide the Department's recovery activities.

The first two Briefing Reports were released on July 29, 2015, "The Hurricane Sandy PLACE Report: Evacuation Decisions, Housing Issues, and Sense of Community," and "The Hurricane Sandy PERSON Report: Exposure, health, Economic Burden, and Social Well-Being" (http://www.scafh.org). Additional Briefing Reports that focus on persistent and unmet needs, and the status of residents' disaster recovery, will be released in the next several months.

"The similarities between Hurricanes Katrina and Sandy are quite disturbing," noted NYU's Abramson. "Many adults and children are still experiencing emotional and psychological effects, so long after the storm passed. In a significant number of cases housing damage is at the heart of the problem, and it's very concerning to hear that so many of the federally-financed programs have ended even though the needs still clearly persist."

Experts are further concerned that the results of this study reflect a pattern that is seen after many large-scale disasters here in the U.S and internationally. "By far, one of the least understood aspects of disaster management is how to make recovery from catastrophic events efficient and rapid, so that people can return to a state of normalcy as quickly as possible", said Irwin Redlener, MD, Director of the National Center for Disaster Preparedness at Columbia University's Earth Institute. "This prolonged uncertainty and persistent trauma are very difficult for families and especially traumatic for children", added Dr. Redlener, who is president of the Children's Health Fund and a professor at the Mailman School of Public Health.

The study is a partnership of four academic centers - the Program on Population Impact, Recovery, and Resiliency (PiR2) at NYU's College of Global Public Health, led by Abramson; the Institute for Families, at Rutgers' School of Social Work, represented by Donna Van Alst, Patricia Findley and Sandra Moroso; Columbia University's National Center for Disaster Preparedness, represented by Irwin Redlener and Jonathan Sury; and Colorado State University's Center for Disaster and Risk Analysis, led by Lori Peek. 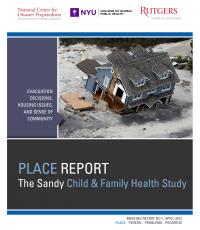