Scientists in the Cincinnati Children's Perinatal Institute and at Azabu University in Japan obtained their data by studying laboratory mice and human germline cells.

In two separate papers appearing in the same edition of the journal, they reveal two distinct and fundamental processes underlying germline transcriptomes. They also show that species-specific transcriptomes are fine-tuned by endogenous retroviruses in the mammalian germline

Germline transcriptomes include all the messenger RNA in germline cells, which contain either the male or female half of chromosomes passed on as inherited genetic material to offspring when species mate. This means that germline transcriptomes define the unique character of sperm and egg to prepare for the next generation of life.

Although the studies are separate they complement one another, according to Satoshi Namekawa, PhD, principal investigator on both papers and a scientist in the Division of Reproductive Science at Cincinnati Children's.

"One paper, Maezawa and Sakashita et al., explores super-enhancers, which are robust and evolutionally conserved gene regulatory elements in the genome. They fuel a tightly regulated burst of essential germline genes as sperm start to form," Namekawa said.

"The second study, Sakashita et al., involves endogenous retroviruses that act as another type of enhancer - gene regulatory elements in the genome - to drive expression of newly evolved genes. This helps fine tune species-specific transcriptomes in mammals like humans, mice, and so on.

Together the studies have significant potential ramifications for clinical practice, according to study authors, who include a multi-disciplinary mix of developmental biologists, bioinformaticians and immuno-biologists. Dysregulation of gene expression in the formation of male sperm is closely associated with male infertility and birth defects.

Viruses, especially endogenous retroviruses (ERVs) that are an inherent part of mammalian biology, can dramatically influence gene expression, investigators report. ERVs are molecular remnants of retroviruses that infect the body and over time incorporate into the genome.

"What we learn from our study is that, in general, viruses have major roles in driving evolution," Namekawa explained. "In the long-term, viruses have positive impacts to our genome and shape evolution."

Those tests revealed that the the genome-wide reorganization of super-enhancers drives bursts of germline gene expression after germ cells enter meiosis, a specialized form of cell division that produces the haploid genome of germ cells.

The study further demonstrates the molecular process through whichsuper-enhancer switching takes place in germ cells. Super-enhancers are regulated by two molecules that act as gene-burst control switches - the transcription factor A-MYB and SCML2, a critical silencing protein in sperm formation.

Endogenous retroviruses are a group of transposable elements (TEs), mobile genetic elements that account for approximately 40-50 percent of a given mammalian genome. Also referred to as "jumping genes," TEs have long been considered genetic threats because transposition can be harmful if, for example, the process disrupts protein-coding genes.

Viruses play critical role in evolution and survival of the species 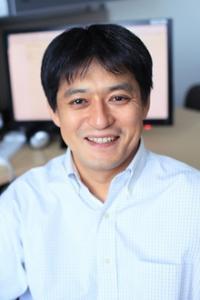