Protected areas in the United States, representing 14 percent of the land mass, provide places for respite, recreation, and natural resource conservation. However, noise pollution poses novel threats to these protected areas, according to a first-of-its-kind study from scientists at Colorado State University and the U.S. National Park Service.

The often-overlooked impacts of noise, driven by expansion of human activities and transportation networks, are encroaching into the furthest reaches of remote areas, according to the study. The research findings highlight the pervasiveness and identify the primary drivers of noise in protected areas.

Rachel Buxton, lead author and post-doctoral researcher in the Department of Fish, Wildlife, and Conservation Biology in the Warner College of Natural Resources, said the team was surprised by how prevalent noise pollution was in protected areas.

"The noise levels we found can be harmful to visitor experiences in these areas, and can be harmful to human health, and to wildlife," she said. "However, we were also encouraged to see that many large wilderness areas have sound levels that are close to natural levels. Protecting these important natural acoustic resources as development and land conversion progresses is critical if we want to preserve the character of protected areas."

Anthropogenic, or human-caused, noise is an unwanted or inappropriate sound created by humans, such as sounds emanating from aircraft, highways, industrial, or residential sources. Noise pollution is noise that interferes with normal activities, such as sleeping and conversation. It can also diminish a person's quality of life.

Measuring noise pollution is a challenging task, given its diffusive nature and since sound is not easily monitored remotely over large spatial scales; it can't be measured by satellite or other visual observations. Instead, for this study, the team analyzed millions of hours of sound measurements from 492 sites around the continental U.S. The results summarized predictions of existing sound levels, estimates of natural sound levels, and the amount that anthropogenic noise raises levels above natural levels, which is considered noise pollution.

In other words, noise reduced the area that natural sounds can be heard by 50 to 90 percent. This also means that what could be heard at 100 feet away could only be heard from 10 to 50 feet.

This reduced capacity to hear natural sound reduces the restorative properties of spending time in nature, such as mood enhancement and stress reduction, interfering with the enjoyment typically experienced by park visitors. Noise pollution also negatively impacts wildlife by distracting or scaring animals, and can result in changes in species composition.

High levels of noise pollution were also found in critical habitat for endangered species, namely in endangered plant and insect habitats. "Although plants can't hear, many animals that disperse seeds or pollinate flowers can hear, and are known to be affected by noise, resulting in indirect impacts on plants," said Buxton.

The study also revealed that high noise pollution levels within protected areas were in specific locations, where noise reduction techniques may best be targeted. The biggest noise-causing culprits were roads, aircraft, human development, and resource extraction.

"Numerous noise mitigation strategies have been successfully developed and implemented, so we already have the knowledge needed to address noise issues," said George Wittemyer, an associate professor at Colorado State University and the senior author of the study. "Our work provides information to facilitate such efforts in respect to protected areas where natural sounds are integral."

Researchers said that many people don't really think of noise pollution as pollution. But the team is hopeful that more people will consider sound as a component of the natural environment.

"Next time you go for a walk in the woods, pay attention to the sounds you hear -- the flow of a river, wind through the trees, singing birds, bugling elk. These acoustic resources are just as magnificent as visual ones, and deserve our protection" said Buxton.

Noise created by humans is pervasive in US protected areas 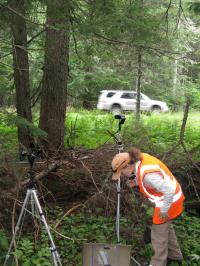