Ten million years before the well-known asteroid impact that marked the end of the Mesozoic Era, dinosaurs were already in decline. That is the conclusion of the Franco-Anglo-Canadian team led by CNRS researcher Fabien Condamine from the Institute of Evolutionary Science of Montpellier (CNRS / IRD / University of Montpellier), which studied evolutionary trends during the Cretaceous for six major families of dinosaurs, including those of the tyrannosaurs, triceratops, and hadrosaurs. Using a novel statistical modelling method that limited bias associated with gaps in the fossil record, they demonstrated that, for dinosaurs 76 million years ago, extinctions outpaced speciations. The impact of a 12-km-wide asteroid 66 million years ago was thus the coup de grâce for an animal group already struggling. These findings, published in Nature Communications on 29 June, show that the demise of dinosaurs was probably tied to global cooling towards the end of the Cretaceous,* when the mean global temperature fell by 7 °C. According to the researchers, herbivores were particularly affected by the first extinctions of this period, and this may have disturbed the equilibrium of ecosystems, setting off cascading extinctions among the other dinosaur families.

* Changes to oceanic circulation patterns then resulted in a decrease in atmospheric CO2 levels. 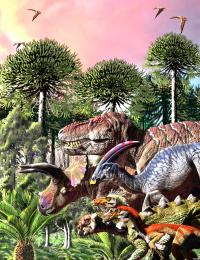 The Last March of Dinosaurs