Lurking in oceans, rivers and lakes around the world are tiny, ancient animals known to few people. Bryozoans, tiny marine creatures that live in colonies, are "living fossils"--their lineage goes back to the time when multi-celled life was a newfangled concept. But until now, scientists were missing evidence of one important breakthrough that helped the bryozoans survive 500 million years as the world changed around them.

Today, the diverse group of bryozoans that dominate modern seas build a great range of structures, from fans to sheets to weird, brain-like blobs. But for the first 50 or 60 million years of their existence, they could only grow like blankets over whatever surface they happened upon.

Scientists recently announced the discovery of that missing evolutionary link--the first known member of the modern bryozoans to grow up into a structure. Called Jablonskipora kidwellae, it is named after UChicago geophysical scientists David Jablonski and Susan Kidwell.

Both are prominent scholars in their fields: Jablonski in origins, extinctions and other forces shaping biodiversity across time and space in marine invertebrates; Kidwell in the study of how fossils are preserved and the reliability of paleobiologic data, especially for detecting recent, human-driven changes to ecosystems. They also happen to be married.

"We were absolutely thrilled. What a treat and an honor, to have this little guy named after us," said Jablonski, the William R. Kenan Jr. Distinguished Service Professor of Geophysical Sciences.

"I never expected to have a fossil named after me," said Kidwell, the William Rainey Harper Professor in Geophysical Sciences, "and here it's one that is an evolutionary breakthrough. We're still smiling about it."

Jablonskipora kidwellae lived about 105 million years ago, latching on to rocks and other hard surfaces in shallow seas--a bit like corals, though they're not related. The fossils came from southwest England, along cliffs near Devon, originally collected in 1903 and analyzed by co-discoverers Paul Taylor and Silviu Martha from London's Natural History Museum.

Bryozoans never figured out a symbiotic partnership with photosynthetic bacteria, as coral did, so their evolution took a different turn. Each one in a colony is genetically identical, but they have specialized roles, like ants or bees. Their shelly apartment complexes house thousands of the creatures, which have soft bodies with tiny tentacles to catch nutrients.

Growing upright was an evolutionary hack for Jablonskipora kidwellae, the two professors said: building bigger colonies extending upward from just a tiny attachment site was a good evolutionary move, allowing it to tap the water flowing above the sea floor--both for food and to scatter its offspring further. "This is a huge competitive advantage for them," Jablonski said, "but it required some evolutionary organization to create a vertical structure." Kidwell added: "This is the next level of cooperation among these individuals within the colony."

They expressed a fondness for the creature, which they said was, like other bryozoans, "small and slow, but fierce." Bryozoan fossils are sometimes found having bulldozed right over neighboring colonies in an intense battle for growing space. In a manner of speaking: this all would have taken place in extremely slow motion.

Jablonski and Kidwell have been friends with Taylor, one of the discoverers, since they spent summers on various research at the London Natural History Museum in the 1980s, but they said his news took them both completely by surprise. Jablonski had previously co-authored one paper with Taylor; Kidwell is currently collaborating with him on a study of bryozoan skeletal debris in modern sediments from the Channel Islands off Los Angeles.

It is the second honor of the year for both Kidwell and Jablonski: In April she received the Moore Medal from the Society for Sedimentary Geology, and in October he received the Paleontological Society Medal, that society's highest honor.

Jablonski had one previous species named after him--a tiny clam--but Jablonskiporawill now be a genus in addition to a species. 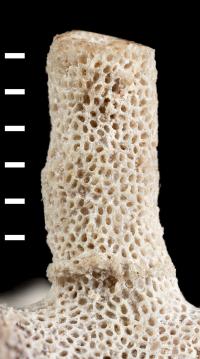