"While various ceramic materials possess high hardness, they fail easily when pulled apart. That is, when subjected to tensile forces. The amount of tension that these materials can withstand before failure, is a small fraction of the compression they can withstand. As a result, high velocity impact of bullets and fragments causes extensive cracking and fragmentation of the material, reducing its ability to fully utilize its superior hardness to resist complex stress states generated by the impact event," explained Dr. Sikhanda Satapathy, of ARL's Soldier Protection Sciences Branch.

Traditionally, the relationship between the granular material's ability to withstand compression and its ability to resist shearing deformation, which causes material to change shape has been described by the Mohr-Coulomb model. This model approximates the material's resistance to shearing deformation (shear strength) as a linear function of applied pressure. In reality, the shear strength does not increase linearly with pressure and will saturate at high pressures.

The UF researchers developed a new model that describes the granular material response more accurately by studying the stress state at which a variety of ceramics fail as reported in the literature by various research teams.

The ARL and the UF team collaborated to employ this improved granular response model in conjunction with a dynamic cavity expansion modeling framework to capture the response of ceramics to the complex impact-induced stress state that includes compression, tension and shear. The dynamic cavity expansion modeling framework uses the pressure required to expand a cavity in an intact material to characterize its ability to resist deep penetration. This pressure, of course, is dependent on how the material responds to compression, tension and shear forces. Due to the applicability of this new model to a broad class of ceramics, the need for expensive experiments to characterize penetration response is significantly reduced. The new penetration model improves the understanding of how brittle ceramic responds to high impact stress by fracturing and comminuting to granular like material, and increases modeling ability of penetration events.

The improved model has been shown to better predict the resistance of a wide range of ceramic targets when shot at by a long-rod projectiles at velocities up to 3km/s. The important material parameters for penetration performance of a ceramic target have been identified through this collaborative effort, which will guide how the failure processes in ceramic can be controlled through improved material design or through a multi-materials systems approach.

"Understanding the mechanics of material response to projectile impact generated stress conditions is crucial in this research," Satapathy said. The research will appear in the International Journal of Solids and Structures, DOI: 10.1016/j.ijsolstr.2017.07.014

International Journal of Solids and Structures

University of Florida, US Army develop model for lighter armor 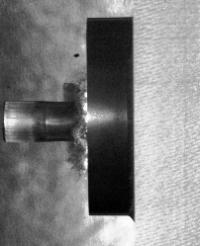