There are over 20,000 species of bee, but accurate data about how these species are spread across the globe are sparse. However, researchers reporting in the journal Current Biology on November 19 have created a map of bee diversity by combining the most complete global checklist of known bee species with the almost 6 million additional public records of where individual species have appeared around the world. The team's findings support that there are more species of bees in the Northern Hemisphere than the Southern and more in arid and temperate environments than in the tropics.

"People think of bees as just honey bees, bumble bees, and maybe a few others, but there are more species of bees than of birds and mammals combined," says senior author John Ascher, an assistant professor of biological sciences at the National University of Singapore. "The United States has by far the most species of bees, but there are also vast areas of the African continent and the Middle East which have high levels of undiscovered diversity, more than in tropical areas."

Many plants and animals follow a pattern, known as a latitudinal gradient, where diversity increases toward the tropics and decreases toward the poles. Bees are an exception to this rule, having more species concentrated away from the poles and fewer near the equator, a pattern known as a bimodal latitudinal gradient. There are far fewer bee species in forests and jungles than in arid desert environments because trees tend to provide fewer sources of food for bees than low-lying plants and flowers.

"When it rains in the desert, there are these unpredictable mass blooms that can literally carpet the entire area," says first author Michael Orr (@mc_orr), a postdoctoral fellow at the Institute of Zoology, Chinese Academy of Sciences. "There's a much higher turnover in the desert because of how patchy the resources are year after year. So there's a lot of potential for new species there."

To create their maps, Ascher, Orr, Hughes, and colleagues compared data about the occurrence of individual bee species with a massive checklist of over 20,000 species compiled by Dr. Ascher and accessible online at the biodiversity portal DiscoverLife.org. Cross-referencing multiple datasets with complementary coverage resulted in a much clearer picture of how the many species of bees are distributed in different geographic areas. This is an important first step in assessing the distribution and potential declines of bee populations.

"We're extremely interested in abundance of bees, but that's something that has to be done in relation to a baseline," says Ascher, "We're trying to establish that baseline. We really can't interpret abundance until we understand species richness and geographic patterns."

While some of these patterns had been hypothesized by previous researchers such as Charles Michener, they were difficult to prove because of inaccurate, incomplete, or difficult-to-access data. "Cleaning" these data was a major hurdle for the researchers.

"I was surprised how terrible most of the prior global data really was about bee diversity," says Alice Hughes (@AliceCHughes), an associate professor of conservation biology at Xishuangbanna Tropical Botanical Garden, Chinese Academy of Sciences and another author on the paper. "A lot of the data were just too patchy or too concentrated on a small number of countries that have prioritized data sharing to be able to use these resources for any large-scale analysis."

While there remains a lot to learn about what drives bee diversity, the research team hopes their work will help in the conservation of bees as global pollinators.

"Many crops, especially in developing countries, rely on native bee species, not honey bees," says Hughes. "There isn't nearly enough data out there about them, and providing a sensible baseline and analyzing it in a sensible way is essential if we're going to maintain both biodiversity and also the services these species provide in the future."

The authors view this research as an important first step towards a more comprehensive understanding of global bee diversity and an important baseline for future, more detailed bee research.

This work was supported by the Chinese Academy of Sciences, the National Science Fund for Distinguished Young Scholars, the Research Fund for International Young Scientists, the China-Singapore Joint Grant, and the Singapore Ministry of Education.

Researchers create first map of bee species around the globe 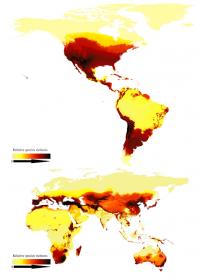