The pandemic has interfered with technological production chains in many areas of agriculture, making the restoration of the Russian seed bank a priority of national food safety. Furthermore, pests and weather conditions prevent the production of standardized raw materials in needed quantities every year. It is only economically efficient to grow high-value crops such as berries or herbs in automated greenhouses. Potatoes, peppers, tomatoes and oilseeds which are needed much more do not fall into this group.

A team from the Federal Research Center for Biotechnology of the Russian Academy of Sciences rose to the challenge and presented the first pre-production prototype of a vertical farm. The prototype was developed in the framework of the "Smart City Farm" project initiated by the World-class Scientific Center "Agrotechnologies for the Future" that was opened in 2020. Scientists have grown healthy potato for further multiplication in the field.

The complex makes it possible to grow products with specified properties under controlled conditions on an industrial scale with more than ten times the productivity from 1 m2 per year. It has also managed to achieve six harvests a year on the City Farm. This is because of unlocking the natural potential of varieties under controlled vertical farm conditions that do not depend on climate, weather or seed contamination risks.

"Our goal was to develop a universal multifunctional tool that would tap into the natural potential of different varieties, increase their productivity, and improve quantitative parameters. We used nature-like technologies and adjustable LED lighting without adding any genetic modifications. Our complex is based on the extensive researches of the RAS Biotechnology Research Centre. It is economically viable for industrial cultivation of the crops in demand. In addition, it is completely environmentally friendly and waste-free," said Vasiliy Zotov, a Candidate of Biological Sciences, and the head of the project.

The vertical farm consists of module stands with automated watering and multichannel LED lighting systems, as well as a set of microclimate and substrate sensors. Currently, the team is developing databases and analyzes the effect of adjustable lighting on various crops at different stages: from in vitro to nursery plants and final products. In particular, the team studies the influence of adjustable lighting on the morphogenesis and production process (including the biosynthesis of secondary metabolites) in different varieties of plants, including future generations.

"Another important feature of the vertical farm and the controlled vegetation technology developed for it is their flexibility and universal nature. The system can be easily changed to fit a particular task. For example, lighting can be chosen and automatically adjusted to secure the growth of other plants: flowers, berries, potatoes, beetroots, or even wheat", said Dmitry Kravchenko, a Candidate of Agricultural Sciences, a senior researcher at the Federal Research Center for Biotechnology of the Russian Academy of Sciences, and a development and agricultural support specialist in the project.

The team has already received the first commercial orders from major agricultural producers and potato processing companies. In the future, the scientists plan to develop a technology for controlled vegetation of essential-oil-bearing plants and vegetables, such as tomatoes and peppers. 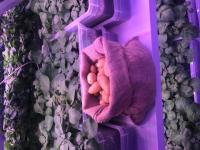