One test changed the fortunes of an advanced 3-D imaging lidar system now baselined for NASA's Restore-L project that will demonstrate an autonomous satellite-servicing capability.

Officials with NASA's Satellite Servicing Projects Division, or SSPD, have officially baselined the Kodiak system -- formerly known as the Goddard Reconfigurable Solid-state Scanning Lidar, or GRSSLi -- to provide real-time images and distance-ranging information during Restore-L. This project will demonstrate how a specially equipped robotic servicer spacecraft can extend a satellite's lifespan -- even one not originally designed for on-orbit servicing.

This device can use its relative navigation technologies -- of which the Kodiak system now is a part -- to essentially drive itself to its destination, much like a self-driving car here on terra firma. Once it locates its target, it can use dexterous robotic arms and software to autonomously grasp, refuel, and relocate a satellite.

The decision to use Kodiak is good news to Principal Investigator Nat Gill, who, along with other technologists at NASA's Goddard Space Flight Center in Greenbelt, Maryland, began developing the advanced scanning lidar system five years ago in part with Goddard Internal Research and Development program funding.

Less than a year ago, only a portion of Kodiak was being considered for use, primarily as a back-up to another system, Gill said.

Under one potential mission scenario, this partial capability would have provided ranging measurements to guide the Restore-L robotic servicer as it approached a satellite not designed for servicing from 1.5 miles down to five feet.

To carry out this orbital dance, the system would have flashed its low-power laser light at the remote-sensing satellite every 25 microseconds. Its onboard telescopes and detectors would have collected the returning light as it bounced off the satellite and another Goddard-developed technology -- a hybrid computing platform called SpaceCube 2.0 -- then would have calculated the light's time of flight to determine distance.

Restore-L will use a second piece of the Kodiak system: its ability to provide real-time, high-resolution images as the robotic servicer approaches the target, which, itself, is moving at thousands of miles per hour.

This capability includes a micro-electro-mechanical scanner and a photodetector. With these components, the system "paints" a scene with the scanning laser and its detector senses the reflected light to create a 3-D image, with millimeter-level resolution, over a range of distances, from meters to kilometers.

A Test Made the Difference

During a demonstration involving the imaging portion of Kodiak and a mockup of an existing Earth remote-sensing satellite, Gill and his team showed that the system's 3-D imaging capabilities, coupled with specially developed algorithms, "could do the job the Restore-L project requires," Gill said. "Now, we have the whole job for Restore-L, including the 3-D imaging."

As a result, mission controllers will be able to see a satellite in high resolution as the robotic servicer approaches as well as automatically determine its location and relative orientation with one small, lightweight system, Gill said. "Because of our team's work ethic, technical skill, and belief in a crazy idea, we've succeeded in raising the cutting edge of spaceflight technology." 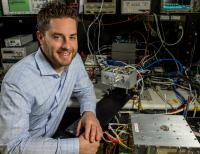