Two powerful typhoons have hit the Philippines in less than a week. Sarika was followed by Typhoon Haima. Using satellite data, NASA estimated the intense rainfall generated by these two typhoons.

Typhoon Sarika (known as Karen in the Philippines) that formed east of the Philippines on Oct. 12, 2016. Sarika intensified and had peak sustained winds of 132 mph (115 knots/213 kph). This wind speed made it the equivalent of a category four on the Saffir-Simpson hurricane wind scale. Sarika made landfall in the Philippines on Sunday, Oct. 16 in the northern province of Aurora on the island of Luzon.

Typhoon Sarika was followed in the Philippines late Wednesday, Oct. 19 by Typhoon Haima (locally known as Lawin). Haima formed south of Guam on Oct. 14, 2016. Typhoon Haima intensified to Category 5 (super typhoon) strength with winds of over 161 mph (140 knots/) as it moved into the Philippine Sea. Haima weakened somewhat and its maximum sustained winds dropped to about 138 mph (120 knots) before making landfall in the northeastern Philippines. Flooding, mudslides, power outages were reported.

The Global Precipitation Measurement mission or GPM core observatory satellite passed above Typhoon Haima on Oct. 20, 2016. A weakened typhoon Haima moved into the South China Sea with winds decreasing to about 109 mph (95 knots). Rain was measured by GPM's Dual-Frequency Precipitation Radar (DPR) falling at a rate of over 218 mm (8.6 inches) per hour in intense storms in the southern side of the typhoon's large eye. GPM is a joint mission between NASA and the Japan Aerospace Exploration Agency (JAXA).

The northern Philippines is located in an area of the western Pacific known as typhoon alley. It has been estimated that over 20 percent of the rainfall in the northern Philippines comes from tropical cyclones that travel through that area. An area of the Philippine Sea northeast of the Philippines has been estimated to have the highest percentage (30 percent) of rainfall from tropical cyclones in the northwestern Pacific Ocean.

NASA's Integrated Multi-satellite Retrievals for GPM (IMERG) were used to estimate the extraordinary amount of rain brought by these typhoons to the Philippines during the period Oct. 12-20, 2016. IMERG data indicates that over 500 mm (19.7 inches) of rain fell over central Luzon during this period. Estimates of real-time IMERG rainfall totals have been adjusted to reflect observed values in similar extreme events.

An infrared image from the Atmospheric Infrared Sounder instrument aboard NASA's Aqua satellite on Oct. 20 at 1:35 p.m. EDT (17:35 UTC) showed cloud top temperatures in Typhoon Haima as it began making landfall in southeastern China. Coldest cloud tops surrounding the 75 nautical-mile wide eye were as cold as minus 63 degrees Fahrenheit or minus 53 degrees Celsius. Cloud top temperatures that cold have been shown to generate heavy rainfall.

On Oct. 21 at 5 a.m. EDT (0900 UTC) the Joint Typhoon Warning Center (JTWC) issued their final advisory on Typhoon Haima. Haima made landfall east of Hong Kong and was located near 23.2 degrees north latitude and 115.2 degrees east longitude. That's about 77 miles northeast of Hong Kong. Maximum sustained winds were near 75 mph (65 knots/120 kph) and weakening. It was moving to the north-northwest at 15 mph (13 knots/24 kph) and will dissipate inland. 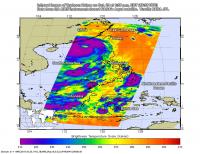