You can't see it with the naked eye, but a new fluorescent organic light-emitting diode (OLED) could shed light on the development of innovative applications in devices such as smartphone and television displays using near-infrared light. Created through the combined work of engineers from Polytechnique Montréal and chemists from Université de Montréal, this fluorescent OLED is 300% more efficient than existing OLEDs in its category. The research team recently published details in the journal Advanced Functional Materials.

In contrast to conventional light-emitting diodes (LEDs) - which generate photons using perfectly assembled semiconductor crystals - OLEDs emit light through the use of organic molecules composed of carbon, nitrogen, and oxygen. Already in use in smartphone displays and high-end televisions, OLED technology is already well established. Yet despite adoption by industry, important challenges still need to be overcome to push this technology forward.

On such example is that blue OLEDs face stability issues, which leads to much faster degradation than their green and red counterparts. On the other side of the spectrum, infrared OLEDs tend to be very inefficient - instead of emitting photons at infrared wavelengths (thus creating light), excited molecules prefer to lose their energy through vibration.

Professor Kéna-Cohen and his team managed to find a way to reduce the wasted energy in infrared OLEDs composed of purely organic molecules. Chemistry Professor William G. Skene (Université de Montréal), developed two new organic compounds to create this new OLED. The near-infrared emitter was inspired by a class of molecules previously used for biomedical imaging - which now makes it possible to design an all-organic OLED with unparalleled properties.

When an organic molecule is excited by an electrical current, it finds itself in one of two quantum states: a singlet or a triplet. For most organic molecules, only the singlet state will produce useable light. For triplets to efficiently generate photons, heavy metal atoms need to be introduced within the molecular structure, increasing the production cost of OLEDs.

Professor Kéna-Cohen, Professor Skene, and their team found a way to harness triplet energy without relying on metal atoms. Their innovative solution? They designed an organic molecule where singlet and triplet states have very similar energy levels, allowing the triplets to be transformed into emissive singlets through a process called thermally-activated delayed fluorescence (TDAF).

With its emission peak at a wavelength of 840 nm, the OLED designed by the research team showed a quantum efficiency of 3.8%. The latter corresponds to the percentage of electrons circulating throughout the device, electrons which are then converted into useable light. It's a new world record for all-organic OLEDs emitting above 800 nm - exceeding the efficiency of the best fluorescent OLEDs by over 300% - and reaching values comparable to those of OLEDs containing platinum-based molecules.

"One distinguishing feature of OLEDs is the ability to manufacture devices directly on glass or plastic, and over large areas - in stark contrast to conventional LEDs. This allows OLEDs to be used in applications that would be otherwise impossible for LEDs," explains Professor Kéna-Cohen.

"One of the greatest advantages of OLEDs is their low manufacturing cost," continues Professor Kéna-Cohen. "However, most OLEDs still contain expensive metals such as platinum or iridium, which is problematic for cost and in terms of sustainability. Our device uses purely organic molecules."

The Polytechnique Montréal-based professor also noted that the absence of visible light emission from the infrared OLEDs created by his research team would also permit their use in light-based wireless communication (Li-Fi). Professor Kéna-Cohen also highlights that these world-record breaking OLEDs could potentially be used for biomedical applications, for facial recognition, or for night-time photography.

"iPhones already use infrared lasers for some facial recognition and autofocus functions - these are the types of applications where infrared OLEDs could be useful," notes Professor Kéna-Cohen. 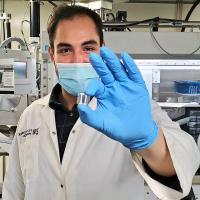