About 140 years ago, Charles Darwin seemed to be bothered by evidence suggesting the sudden occurrence of numerous angiosperms in the mid-Cretaceous. Since Darwin's theory of evolution implies that all organisms should increase gradually, the sudden appearance of angiosperms would have represented a headache in his theory.

Therefore, the sudden occurrence of numerous angiosperms (if seen by Darwin as "the origin of angiosperms") would rightfully have been mysterious and abominable to him.

Over more than a century of study, however, people have found many angiosperms dating to earlier periods, suggesting the origin of angiosperms was much earlier than the mid-Cretaceous. So what was the phenomenon that bothered Darwin so much?

A group led by Prof. WANG Xin from the Nanjing Institute of Geology and Palaeontology (NIGPAS) of the Chinese Academy of Sciences may have an answer. In the Nov. 13, 2018 online issue of Scientific Reports, the scientists describe a flower, Lijinganthus revoluta, embedded in Burmese amber dating to 99 million years ago (Ma). The fossil is exquisite and complete, including all parts of a perfect pentamerous flower, namely, the calyx, corolla, stamens, and gynoecium, and belongs to the Pentapetalae of Core Eudicots.

Together with contemporaneous flowers and fruits, Lijinganthus indicates that Core Eudicots flourished on Earth about 100 Ma. Although this group can be dated back to the Barremian (about 125 Ma) by their characteristic tricolpate pollen grains, Eudicots did not dominate vegetation until about 20 million years later (mid-Cretaceous).

Accompanying this Core Eudicot Boom, Gnetales and Bennettitales underwent rapid decline. Apparently, what bothered Darwin was not the assumed "origin of angiosperms" but a Core Eudicot

Boom! According to current knowledge of the fossil record, angiosperms originated much earlier.

The co-authors of the paper include Dr. LIU ZhongJian at Fujian Agriculture and Forestry University and Dr. HUANG Diying and CAI Chenyang at NIGPAS. This paper is freely available online at http://www.nature.com/articles/s41598-018-35100-4. 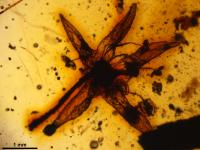 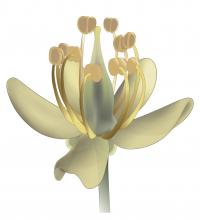