Recent improvement of touch screens has allowed a wide range of applications due to their convenience of use, including ATMs and smartphones, for example. In the case of a smartphone, a user can hold it in the hand with the most convenient tilt angle and distance. In the case of an ATM, an installed touch screen is operated by a user while standing. Japanese Industrial Standard (JIS) Z8519 recommends that touch screens should be installed below shoulder height when the screen is placed vertically and above elbow height when placed horizontally. However, not many studies have been performed on their installation for the least physical workload of users and best screen visibility. The height of installation is especially important; if a touch screen is installed too high, it is difficult for small persons; while too low, one may need to crouch (Figure 1). Installation tilt angle is deeply related to the height for ease of use. Here, we performed research on physical workload and screen visibility in the use of touch screens for a Pareto optimal solution*1) (i.e. optimal solution for both parameters).

Scientists at the Institute for Frontier Science Initiative, Kanazawa University, conducted the current research in collaboration with a scientist from Tokyo Metropolitan University. Ten students participated in the experiments. The height of the touch screen was set as 50, 65 or 80% of each participant's height. The tilt angle of the touch screen was set as 0 (horizontal), 45 and 90 degrees (vertical) (Figure 2A). The size of the touch screen buttons was 10, 20 and 30 mm (Figure 2B). For screen visibility, a subjective scale for the individual participating students was adopted. The physical workload was quantified as joint torque ratio*2) (JTR) calculated after measurements of the angles of joints, i.e. neck, shoulder, elbow, wrist, waist, knee, and ankle.

The Pareto optimal solution using those data showed ranges of 1124-1251 mm for the absolute height and 44.4-67.9° for the tilt angle. Concerning the size of the characters, the larger size showed better visibility; 20 mm buttons proved to be enough in practice. The visibility was reduced, however, when the size was 10 mm.

This research is a case study for multi-objective optimization of screen visibility and physical workload of users on installed touch screens. Touch screens of ATM provide a trade-off relationship; i.e. improvement of one characteristic causes depreciation of the other. Nonetheless, an optimal solution was obtained for both visibility and physical workload, although the number of subjects was just 10 and the experimental conditions were rather limited. The current research was performed with healthy young students but for future and more comprehensive studies, it is necessary to include aged and even handicapped persons. In addition, while this research imposed rather short-time tasks at the touch screen on the subjects, we plan future studies on more time-consuming tasks.

Pareto optimum is a state of allocation of resources at which it is impossible to reallocate so as to make any one criterion better off without making another worse. Pareto optimal condition is a condition under which no more Pareto improvement is possible by any means.

Joint torque (T) is the product of the weight (M) of the joint and the distance (L) of the center of mass from the joint, multiplied by acceleration of gravity (g). 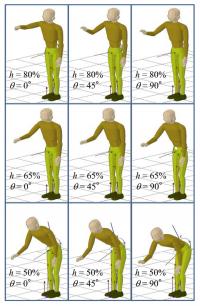