How do you turn "dumb" headphones into smart ones? Rutgers engineers have invented a cheap and easy way by transforming headphones into sensors that can be plugged into smartphones, identify their users, monitor their heart rates and perform other services.

"HeadFi could turn hundreds of millions of existing, regular headphones worldwide into intelligent ones with a simple upgrade," said Xiaoran Fan, a HeadFi primary inventor. He is a recent Rutgers doctoral graduate who completed the research during his final year at the university and now works at Samsung Artificial Intelligence Center.

A peer-reviewed Rutgers-led paper on the invention, which results in "earable intelligence," will be formally published in October at MobiCom 2021, the top international conference on mobile computing and mobile and wireless networking.

Headphones are among the most popular wearable devices worldwide and they continue to become more intelligent as new functions appear, such as touch-based gesture control, the paper notes. Such functions usually rely on auxiliary sensors, such as accelerometers, gyroscopes and microphones that are available on many smart headphones.

HeadFi turns the two drivers already inside all headphones into a versatile sensor, and it works by connecting headphones to a pairing device, such as a smartphone. It does not require adding auxiliary sensors and avoids changes to headphone hardware or the need to customize headphones, both of which may increase their weight and bulk. By plugging into HeadFi, a converted headphone can perform sensing tasks and play music at the same time.

The engineers conducted experiments with 53 volunteers using 54 pairs of headphones with estimated prices ranging from $2.99 to $15,000. HeadFi can achieve 97.2 percent to 99.5 percent accuracy on user identification, 96.8 percent to 99.2 percent on heart rate monitoring and 97.7 percent to 99.3 percent on gesture recognition.

Rutgers co-authors include Siddharth Rupavatharam, an electrical and computer engineering doctoral student, and Research Professor Richard E. Howard, the senior author and co-primary inventor at Rutgers' Wireless Information Network Laboratory (WINLAB), a research center in the School of Engineering. Engineers at the University of Science and Technology of China, University of Massachusetts Amherst, Microsoft and Alibaba Group contributed to the paper. A patent is pending.

How to make all headphones intelligent 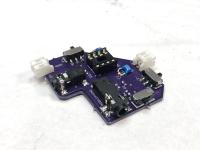