WASHINGTON D.C. Nov. 26, 2013 -- What do Jell-O, toothpaste, and floating fire-ant rafts have in common? All are so-called "viscoelastic" materials, meaning that they can both resist flow under stress, like honey, and they can bounce back to their original shape when stretched or compressed, like rubber bands. As such, the materials neither behave exactly as solids or exactly as fluids, but as something in between.

And fire-ant rafts' unusual properties don't stop there, according to a new study presented in a talk at the upcoming American Physical Society's Division of Fluid Dynamics (DFD) meeting in Pittsburgh, Pa. Researchers found the rafts actively reorganize their structure, a feat that allows them to more effectively cushion themselves against applied forces, such as the battering of raindrops or the surges of waves.

According to study lead Zhongyang Liu, an undergraduate student in the laboratory of Georgia Tech mechanical engineer and biologist David Hu, fire ants form the rafts by linking their legs and jaws. "The linkage structure they form, similar to a truss structure, is elastic and so is able to sustain external forces," he said.

However, the structure of an ant raft is far from stationary. Indeed, it is in constant flux because the ants repeatedly form, break, and reform their body-part connections. Through these rearrangements, the researchers discovered, the raft is able to store energy (and thus acts as an elastic material) and dissipate energy (as a viscous material) to equivalent degrees – a situation that has not been seen in any other active materials, such as bacteria films or liquid crystals. (Indeed, the researchers found, rafts made of dead ants don't show this feature; instead, they behave more like solid viscoelastic materials).

"This is our most important discovery," said Liu, who noted that the swarm intelligence that the ants use to accomplish their continual construction could be applied to robotics research. Furthermore, he added, "the special structure formed by the ants might inspire new research in material science."

Any credentialed journalist, full-time or freelance, may attend the conference free of charge. Please email: dfdmedia@aps.org and include "DFD Press" in the subject line. Work space will be provided on-site during the meeting and news and graphics will be hosted on the Virtual Press Room: http://www.aps.org/units/dfd/pressroom/press.cfm

ABOUT THE APS DIVISION OF FLUID DYNAMICS

The Division of Fluid Dynamics of the American Physical Society (APS) exists for the advancement and diffusion of knowledge of the physics of fluids with special emphasis on the dynamical theories of the liquid, plastic and gaseous states of matter under all conditions of temperature and pressure. DFD Website: http://www.aps.org/units/dfd/index.cfm 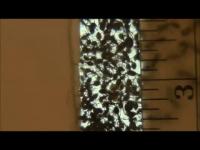 Shearing One Layer of Fire Ants