Rushing to salvage fossils from the Panama Canal earthworks, Aldo Rincon, paleontology intern at the Smithsonian Tropical Research Institute, unearthed a set of fossil teeth. Bruce J. MacFadden, curator of vertebrate paleontology at the Florida Museum of Natural History, University of Florida in Gainesville, describes the fossil as Anchitherium clarencei, a three-toed browsing horse, in the May 2009 issue of the Journal of Paleontology.

By far the most complete fossil of a horse collected at the site in excavations spanning the last century, characteristics such as the shape of the teeth confirm the identity of two earlier finds and indicate that this horse was primarily a forest-dwelling browser living in the area between 15 and 18 million years ago. This evidence supports MacFadden's earlier proposal that the habitat was probably a mosaic of relatively dense forest and open woodlands. The presence of this browsing horse in Panama significantly extends the southern tip of its range from previous finds from roughly the same period in Florida, Nebraska and South Dakota.

Expanding the Panama Canal waterway to make way for supersized ships is a dream come true for geologists and paleontologists, according to Carlos Jaramillo, senior scientist at the institute, who, in collaboration with the University of Florida and the Panama Canal Authority, has organized a team of researchers and students who move in following dynamite blasts to map and collect exposed fossils.

"This is one of very few places in the tropics where we have access to fresh outcrops before they are washed away by torrential rains or overgrown by vegetation, and we expect the fossils that we have been salvaging to resolve some major scientific mysteries," said Jaramillo. "What geological forces combined to create the Panama land bridge? Was the flora and fauna in Panama before the land bridge closed similar to that in North America, or did it include other elements?"

So far, 10 million cubic meters of earth have been removed from the Canal, though the pace of operations is about to accelerate as the Canal Authority awards the final bids for the construction of a third set of locks. More information regarding the Panama Canal Geology Project is available at http://striweb.si.edu/jaramillo/current_research/index.html.

STRI, headquartered in Panama City, Panama, is a unit of the Smithsonian Institution. The institute furthers the understanding of tropical nature and its importance to human welfare, trains students to conduct research in the tropics and promotes conservation by increasing public awareness of the beauty and importance of tropical ecosystems. Web site: www.stri.org. 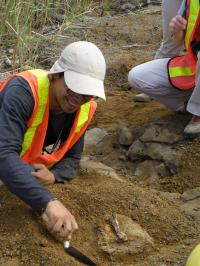