Research on cycad trees in Colombia, Guam, and the Philippines has illuminated how knowledge of their branching behavior may benefit conservation decisions for the endangered plants. In a study published in the December issue of the journal Horticulturae, scientists from the University of Guam and the Montgomery Botanical Center in Florida show that the number of times a cycad tree produces a branch can be used to infer the sex of the tree. The findings have practical applications for use of the sexual dimorphism that is described.

Cycads are unique seed-producing plants. Conservation actions are being implemented for many species around the world as cycads are being threatened by human activity.

The arborescent cycad stem is constructed using an approach that botanists call pachycaulous. These stems are thick and produce few branches compared with other tree species.

"Several historical reports from botanic gardens revealed a greater number of lifetime branching events occurred for male cycad plants," said Michael Calonje, cycad biologist at the Montgomery Botanical Center and co-author of the study. "We decided to take a look into some of our field data from four arborescent cycad species to determine if this form of sexual dimorphism also occurred in natural habitats."

An understanding of how frequently cycads experience reproductive events is helpful for interpreting these results, as branching often occurs immediately after the production of reproductive structures.

Most natural populations of cycad trees contain roughly 50% male trees and 50% female plants. However, a chronic difficulty in conducting field work is that most trees do not exhibit active strobili, so the unambiguous determination of the sex of cycads in the wild is difficult. The authors contend that an understanding of branch dimorphism provides a new tool that conservationists may exploit to better assess population traits.

The new knowledge has illuminated an interesting outcome from the threats to Cycas micronesica conservation on the island of Guam. Several non-native insect pests invaded the island in 2003--2005, and these invasions initiated a series of events that have killed 96% of the cycad population. A comparison of the pre-invasion branching data versus the contemporary branching data reveals that most of the unbranched trees have been killed and fewer of the branched trees have been killed.

According to Calonje and Deloso, these observations indicate that the relentless herbivory by the non-native insects has preferentially killed more female trees. This information is crucial for conservation decision-makers because recovery of the island's cycad population may become constrained by the scarcity of female trees. A practical use of this new knowledge is in ongoing tree salvage projects, where cycad trees are being rescued from construction sites. The conservation practitioners may use the branching data to develop a more accurate estimate of parity between male and female trees during selection of which trees to rescue.

The results also provide an example of the benefits of research on healthy plant populations. For research results to be most informative, conservationists need the knowledge to be generated from plants and habitats that do not exhibit contemporary threats. That knowledge can then inform conservation goals by providing benchmarks that serve as species recovery goals. 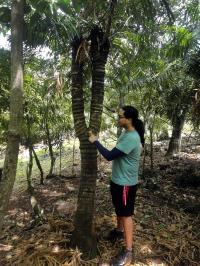