Malaria is a life-threatening disease caused by a parasite that invades one red blood cell after another. Little is known about this infection process because it happens so quickly, potentially explaining why there is currently no approved malaria vaccine. In a study published by Cell Press August 19th in the Biophysical Journal, researchers used a tool called laser optical tweezers to study interactions between the disease-causing parasite and red blood cells. The findings reveal surprising new insights into malaria biology and pave the way for the development of more effective drugs or vaccines for a disease that affects hundreds of millions of people around the world.

"Using laser tweezers to study red blood cell invasion gives us an unprecedented level of control over the whole process and will help us to understand this critical process at a level of detail that has not been possible before," says senior study author Julian Rayner of the Wellcome Trust Sanger Institute.

The malaria-causing parasite, Plasmodium falciparum, usually leaves one red blood cell and invades another in less than one minute and loses the ability to infect host cells within two or three minutes of release. To study this transient event, Rayner and senior study author Pietro Cicuta of the University of Cambridge used laser optical tweezers because this instrument allows for precise control over the movements of cells by exerting extremely small forces with a highly focused laser beam. The researchers used optical tweezers to pick up individual parasites that had just emerged from a red blood cell and deliver them to another red blood cell, demonstrating that the technique is suitable for studying the invasion process.

Rayner and Cicuta also used optical tweezers to measure how strongly the parasites adhere to red blood cells. They discovered that attachment is probably mediated by multiple weak interactions, which could potentially be blocked by a combination of drugs or antibodies. Moreover, the team used the technique to shed light on how three different invasion-inhibiting drugs affect interactions between the parasites and red blood cells.

Taken together, the findings show that optical tweezers are a powerful tool for studying malaria biology and drug mechanisms at the single-cell level. "We now plan to apply this technology to dissect the process of invasion and understand what genes and proteins function at what step," Rayner says. "This will allow us to design better inhibitors or vaccines that block invasion by targeting multiple steps at the same time." 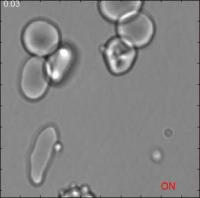 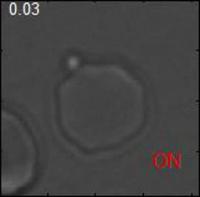