In humans (as well as all other organisms) genes encode proteins, which in turn regulate all the different specific cellular functions of the body. The genetic information found in our DNA is first converted into messenger RNA (mRNA) by a process called transcription. The mRNA acts as a template as it is read by intracellular organelles called ribosomes, which then create (or translate) the appropriate protein from the correct amino acid components. miRNAs are short noncoding RNAs that do not make any protein. However, they do play crucial roles in regulating the stability of mRNAs and translation of mRNAs to proteins. In addition, the abnormal expression of miRNAs is associated with a number of human diseases such as various types of cancer due to the defects of miRNAs leading to increased levels of oncogenic mRNAs or decreased levels of tumor suppressor mRNAs. For this reason, having the ability to manipulate the synthesis of miRNAs in cells is crucial for the development of therapies to correct the defects in their expression and thus treat these diseases.

To maintain normal functions in cells the expression of miRNAs must be strictly controlled. The human Microprocessor complex is responsible for cleaving pri-miRNAs to produce miRNA precursors (pre-miRNAs) and so as it ultimately determines the functions of miRNA, this is why it was focus of this research. A number of RNA elements located in some parts of the pri-miRNA structure (i.e., the apical loop, basal segment and lower stem) have previously been revealed to affect the processing of pri-miRNA by Microprocessor. However, a long-standing puzzle was whether there were any RNA elements in the upper stem region of pri-miRNA that might affect the cleavage ability of Microprocessor and hence subsequent cellular processes.

A research team led by Prof. Tuan Anh NGUYEN, Assistant Professor in the Division of Life Science at HKUST, recently discovered how RNA elements in the upper stem of pri-mRNAs affect the action of Microprocessor*. In this study, the team first established a reliable protein purification system using human cells, and then conducted high-throughput enzymology assays to investigate the catalytic mechanism of Microprocessor as it cleaved approximately 200,000 randomized pri-miRNAs. They then ran the assay results using next-generation sequencing technology, and the big data they obtained were analyzed using various bioinformatics tools. Finally, the findings resulting from the big data analysis were verified in human cells. Prof. Nguyen and his team discovered multiple RNA elements in the upper stem of pri-mRNAs, which are crucial for regulating the expression of various miRNAs in human cells. The presence of these elements meant that when the pri-mRNAs were cleaved with Microprocessor, then less products were made or various alternative cleavage sites were generated instead of the original sites. These affected the expression level of the miRNAs, which resulted in dysregulation of the subsequent production of proteins from mRNAs, thus leading to abnormal human cell activities.

"Our work has enhanced our understanding about the differential levels of miRNAs in diverse cellular processes. Our new results may help us interpret the cause of many miRNA-related human diseases. Also, by specifically targeting the particular RNA elements we've identified, we should be able to restore the normal levels of many abnormally-expressing miRNAs in many miRNA-related disorders, leading to the potential development of clinical miRNA-based diagnostics," Shaohua LI, one of the two co-first authors of the paper said. "Our next step is to develop our high-throughput enzymology assays by designing new RNA substrates, and engineering proteins to identify more RNAs elements that are critical for accurate and efficient miRNA production," Trung Duc NGUYEN, the other co-first author, added.

"Last month, my team and I published another paper, this time in Nucleic Acids Research**, where we discovered other new and exciting RNA elements that control miRNA levels. We are currently using different approaches, including gene-editing technology, to modify the RNA elements we discovered in these two studies, in order to more accurately control the level of miRNAs in cellular systems. The expected outcome from this study will be to lay the foundation for the future development of these RNA element-targeting therapeutics for miRNA-related diseases." Prof. NGUYEN said. 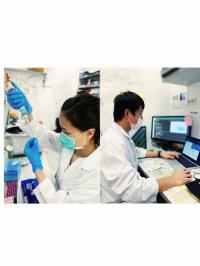