Crossing a 23-kilometer stretch of ocean from mainland Panama to Coiba, the largest offshore island in the Eastern Pacific, a group of intrepid biologists hoped to find species never reported there before. But in addition to discovering new species, the 2015 Coiba BioBlitz crew was surprised to find that capuchin monkeys spent so much time on the ground there.

"Most of us have worked on Barro Colorado Island (the Smithsonian's research station in Panama's Lake Gatún) where capuchin monkeys are used to people, but we had never seen them spending so much time on the forest floor," said Claudio Monteza, now doing his PhD at the Max Planck Institute of Animal Behavior and University of Konstanz. "We never saw moms carrying babies come down to the ground like we did on Coiba. Even the most habituated groups on Barro Colorado are very careful with the babies."

Meg Crofoot and Mark Grote, then at the University of California, Davis, were intrigued by this shift in behavior and the insight it might provide into why human ancestors originally descended from the trees. They encouraged Claudio to make the unusual behavior of the monkeys on Coiba the subject of his masters' thesis.

"In the Old World there are lots of primates that have adapted to life on the ground, but no one knows why this behavior is missing in New World primates," Claudio said.

Isolated from the mainland between 12-18 thousand years ago, Coiba is home to plant and animal life found nowhere else on Earth. When the Spanish first sailed to Coiba in 1516, chroniclers reported an island densely populated by indigenous peoples, but by 1550, the island had been depopulated, leaving only a small settlement of Spanish colonists. And from 1919 to 2004, the island was a penal colony where prisoners' movements were restricted, leaving most of the island to its wild inhabitants.

Claudio suspected that the fearlessness of Coiba's capuchins might have a simple explanation: Coiba lacks jaguars, pumas, tayras (large weasels), coyotes, jaguarundis and ocelots--all identified as predators based on capuchin remains in fecal samples. One of the reasons that no one has studied this before is because it is nearly impossible for researchers to observe the effects of predators that are frightened away when scientists show up.

But Claudio's team got around this problem by using cameras. They set up camera traps at knee height on the bases of trees on Coiba and a on much smaller island nearby called Jicarón. Movement triggers the video recorders in the traps. Then they compared the videos of monkeys on the islands with videos from camera traps at three mainland sites: the STRI research station on Barro Colorado Island, the nearby Gigante Peninsula and in Panama's Soberanía National Park--part of a study by staff scientist Patrick Jansen as part of the global Tropical Ecology Assessment and Monitoring Network (TEAMS).

"We didn't record any mammalian predators on the ocean islands, and there were more predators in Soberanía National Park than on Barro Colorado or Gigante Peninsula," Claudio said. "The results were what we expected in the absence of predators: The party sizes of the monkeys--the number of individuals on the ground at one time--on Coiba Island were much bigger than at any of the mainland sites."

Monkeys at sites where there were predators also spent more time on the ground during the middle of the day, when predators are less active. In contrast, monkeys on the Pacific islands did not focus their activity at a certain time of day. The longest visits to the ground were made on Jicarón (14.5 minutes) and Coiba Islands (7.9 minutes).

Primates coming down from the trees played a significant role in human evolution, but the still-controversial explanations usually involve changes in climate or diet.

Millions of years ago, when the Isthmus of Panama rose from the sea to form a land bridge between North and South America, global ocean currents shifted, perhaps causing a drying trend in Africa and the replacement of forests by savannahs, forcing human ancestors to spend more time on the ground.

Others suggest that human ancestors came to the ground to forage for fungi.

"Our study indicates that predators likely play a key role in explaining why there are no terrestrial primates in the Neotropics," said Crofoot, who is now director of the Max Planck Institute of Animal Behavior and professor at the University of Konstanz. "When there are no predators, primates can become more terrestrial, even if they aren't 'forced' to by changes in forest structure. But Coiba is a unique place where we also discovered that these monkeys are using stone tools. Is that a result of the lack of predators, or could the capuchins' ability to use new food source be the explanation in itself?" 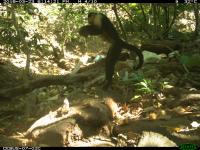 Remains of a Crab