Tropical Cyclones generate a lot of rainfall and the Global Precipitation Measurement mission or GPM satellite and constellation of satellites gather that data and share it with forecasters. GPM recently passed over Tropical Storm Isaac and analyzed its rainfall.

GPM is an example of NASA's partnerships with other agencies around the world. GPM is a joint mission between NASA and the Japan Aerospace Exploration Agency or JAXA and the GPM core observatory satellite had an excellent view of tropical storm Isaac on Sept. 11, 2018 at 11:53 p.m. EDT (Sept. 12, 2018 at 0353 UTC).

The satellite revealed that, although expected to weaken, Isaac still contained some powerful convective storms. The GPM satellite's Microwave Imager (GMI) and Dual-Frequency Precipitation Radar (DPR) instruments collected data that were used in an analysis of Isaac's rainfall. Those data showed that the heaviest rainfall within the tropical storm was located to the southeast of Isaac's center of circulation. GPM's radar (DPR Ku Band) measured rain falling at a rate of over 140 mm (5.5 inches) per hour when it sliced through an isolated convective burst southwest of Isaac's center.

GPM's radar (DPR ku Band) data were used in at NASA's Goddard Space Flight Center in Greenbelt, Md. to create a 3D view from the north-northeast to show the 3D structure of precipitation within the convective burst southwest of ISAAC's center of circulation. DPR found that heavy downpours there. Storm tops were found by GPM's radar to reach heights above 16.2 km (10.0 km) in this area of convection.

At 11 a.m. (1500 UTC), the center of Tropical Storm Isaac was located by a NOAA Hurricane Hunter aircraft near latitude 15.0 degrees north and longitude 54.7 degrees west. Isaac is moving toward the west near 17 mph (28 kph), and this general motion with some decrease in forward is expected to continue through the weekend. Aircraft data indicate that maximum sustained winds remain near 60 mph (95 kph) with higher gusts. Gradual weakening is forecast during the next 72 hours. 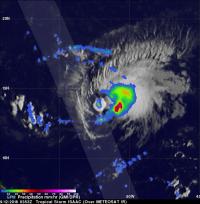